Last spring, the Wall Street Journal unearthed a decades-old secret. Conspirators had come from all over the country to launch a complex plot from sleepy Williamsburg. They struck once and faded away — seemingly forever.

They had taken nearly every precaution, told only a scarce few others and almost got away with it. In the end, NBA stars, Division I athletic departments and the Associated Press alike had been fooled: basketball’s Leo G. Hershberger Award was a hoax.

In fall of 2012, the Wall Street Journal’s Rachel Bachman was on-campus in Gainesville, Fla., reporting on the University of Florida football team as part of their “Varsity Vetter” series. While she pursued a big-picture look at the school’s athletics program, sources suggested Bachman talk to Steve Noll ’74, a lecturer in the history department and walking Gators encyclopedia.

“After we talked about Gators football, he said, ‘Hey, I’ve got another story for you,’” said Bachman, before admitting that “when that happens, it’s not usually very interesting.”

But Noll proceeded to unwind the tale that would land him on the front page of the nation’s largest newspaper.

“I almost couldn’t believe my ears,” said Bachman. “He and some friends concocted this whole fake award, this whole fake association, perpetrated this hoax on everybody and had subsequently gotten away with it. Nobody had caught them.”


His friends were Tom Duncan ’74, Reed Bohne ’74 and Paul Pavlich ’74, all fellow members of 1973’s fictitious National Association of Collegiate Basketball Writers (NACBA) and former residents of Yates 3rd Center. Inspired by the Tribe’s own unsung hoops star Mike Arizin ’76, the four William & Mary juniors decided to play a trick. They named Arizin and 14 other rookie basketball players as winners of the first and only Leo G. Hershberger Award. And then they hoped their deception wouldn’t get discovered — sort of.

“We were 20 years old,” Pavlich said. “We were telling anybody after three beers. We’d make terrible spies.”

Pavlich estimates up to 40 people knew the secret, but “none of them had any inclination to go snitch on us.” Regardless, there were still many details to consider. Printing certificates and renting a post office box were important, but so was getting the right mix of players on the team. Co-conspirators with broad basketball knowledge were critical, as were Swem Library’s many subscriptions to nationwide papers. This was five years before ESPN and a quarter-century prior to Google. There were only a handful of college basketball games on TV per week, and they felt some players weren’t getting the attention they deserved.

“[Arizin] was averaging 17 points per game,” said Noll. “[Current Kansas standout] Andrew Wiggins is only averaging 15 and he’s on the cover of Sports Illustrated.” The opportunity to poke fun at the negligent basketball establishment was too much to resist.

“We were trying to be a bit different,” said Duncan. “This was one way to bring some humor and promote Tribe sports at the same time.” 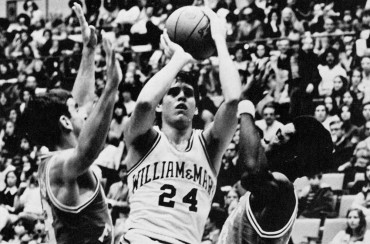 
“The team is something that a regular organization would have been proud to have as their recipients,” said Noll, “and we did it by newspaper.” Then the word got to the Associated Press and began to appear in places like the Hartfort Courant and Los Angeles Times.

“No one really ever checked,” said Duncan. “I think that was amazing.”

Noll, Duncan, Bohne and Pavlich even went so far as to use an old rubber mask to attend Tribe basketball games in disguise — as Leo G. Hershberger.

Precisely how convincing a group of college juniors were in impersonating their own fictitious sportswriter is debatable, but there was no question that they had been thorough.

Pavlich added, “We were more detail-oriented on that project than anything we did as undergraduates at W&M.”

“I regret to this day that I didn’t think to make this an honors project at the College,” said Bohne, “and get badly needed extra credit.”

the eve of March Madness. There was some fear that the pranked awardees might be offended, but the reaction was almost completely positive, if a little incredulous.

“I would not have been upset if it never came out,” said Duncan. “We know what we did and we were quite happy with it. But it was 40 years ago; what can happen? The timing turned out well. Rachel did a great job with the story; we were all pleased by the reaction.”

“Anything we can do to help Tribe basketball, we’d be interested,” he said. Curiously, U.S. Figure Skating created its own, non-fictitious Hershberger Award in 2010.

Noll keeps a framed Hershberger certificate in his office in Gainesville, where he first unveiled the hoax to the world. He’s also got yet another rubber mask.

“Somehow while we were in college, we left [the original Hershberger mask] in the car and it melted,” said Noll. “So Leo is dead, but at my wedding these guys came with a very similar mask which became Leo’s brother Myron.” Myron stands vigilant near the Swamp to this day.

All of the guys — along with Charlie Duckworth ’74, Tom Monday ’74, Al Sharrett ’74 and Jay Gsell ’73 — remain in touch across America via email, sharing anything from bad jokes to the latest news from the College. They call it the “W&M Sewing Circle Collective.” After all, when Noll’s father dropped him off at Yates as a freshman, he had one piece of advice: “Make good friends.”

“I think he’d be very happy with the people I met at the College,” Noll said. “The people I remained in contact with are the people who share these values. And the friends survived not just those four years but everything in between.”

All four men got together at Duncan’s daughter’s wedding in California last fall, gathering as always for a photo next to some familiar green and gold — adorn-ing the ubiquitous Waste Management dumpsters.

This fall, the Class of ’74 will celebrate their 40th Reunion.

“The story matured with age,” added Bohne. “We didn’t.”

As for old crusty Leo, like with the best tall tales, the truth is stranger than fiction.

“It turns out, there really was a Leo G. Hershberger,” said Duncan. “I think he passed away, but his son wrote in on one of the Internet comments somewhere. We just made it up because it sounded like a crusty old sportswriter, and we had a mental image of a guy chomping on a cigar, wearing a short-sleeve white shirt with his tie undone.”

“If anyone is upset about being bamboozled,” said Bohne, “I proudly blame the influence of the College.”