For Mikasa La’Charles ’06, fashion is in her blood. With both her mother and aunt modeling professionally all over the world, it was only natural that La’Charles developed her passion for fashion at an early age.

She remembers that as a 5-year-old, she sat at her kitchen table in her childhood home in Philadelphia, doodling different shapes, piecing them together and calling them shirts. When she finished her sketches, La’Charles took the paper to her mom, asking her if this is something she could do forever. Her mom replied, “Yes, Mikasa. They’re called fashion designers.” And at that moment, La’Charles discovered her destiny.

While at William & Mary, this dream began to become a reality when she had the opportunity to study abroad in Europe on three different occasions. Being able to travel internationally allowed La’Charles to cre-ate a broader design aesthetic, and to have more courage to put herself out there with her designs.

“Studying abroad definitely helped to mold my creativeness,” La’Charles said. “When I would sketch, I would think, ‘Am I too ahead of the curve?’ But when I went to Italy, I would notice that the trends there wouldn’t reach the States until about two years later. I learned that even though my designs might not have been something the States would gravitate to any time soon, I knew it was something that was stylish enough that they would eventually.”

And she was right — her designs did catch on. So much so that right after graduation, La’Charles landed an internship with an internationally distributed streetwear clothing brand called Shmack Clothing, housed un-der the RP55 Group, a well-known clothing sales and distribution company based out of Virginia Beach, Va. After interning for a short three months, she was offered a full-time position and stayed with the company for three years as an executive assistant and later as an e-commerce manager. La’Charles then landed a position as an associate account executive in New York City with a women’s contemporary fashion brand called Laun-dry by Shelli Segal.

Now with her own brands, House of VII Jewels, Mikasa La’Charles and Bridal Veil Bar, La’Charles continues to design her own clothing collections. In 2012, those designs caught the eye of the people of Charleston Fash-ion Week. La’Charles was selected as one of the Top 20 Emerging Fashion Designers along the East Coast.

When designing her collections, La’Charles says she finds inspiration from the people in her personal life and celebrities. “When I’m designing, I think, ‘Would Rihanna wear this?’” La’Charles said. “But I also want my clothing to appeal to a mass audience, because not everyone would wear what Rihanna would wear.” And when asked about her personal style, she labels herself as a chameleon. “It varies with my mood, which is what makes fashion so great.”


For La’Charles, a career in fashion was always her main priority, until she had her now 3-year-old son, Hunter. However, being a single mom with a thriving business hasn’t slowed her down for even a second. “When people found out I was expecting, they told me they were surprised I decided to continue my career in fashion since it takes so much of my time,” said La’Charles. “But I have been lucky to maintain a good balance between the both. Hunter serves as a main motivation for me to continue pursuing my career because I want to be an excellent mom and provider, but also create opportunities for myself and a career that he can reap the benefits from.”

Like any other business owner, La’Charles had to learn a lot of lessons along the way. She credits the skills she learned at William & Mary for helping her get so far in the fashion industry. “The College allowed me to develop a strong business mindset,” she said. “It helped me to prioritize my time, and to be able to multitask well, which has helped me handle the pressure of meeting deadlines and the stress of this industry. Also, be-cause of the diverse student body, I learned how to comfortably develop relationships with all kinds of different people.”

La’Charles’ brands continue to enjoy success and she has big plans for her future, including working her way into more department stores, as well as opening her own brick-and-mortar store. “If I had a job that wasn’t in fashion, I would be crying,” said La’Charles. “There’s honestly nothing else I want to do.” 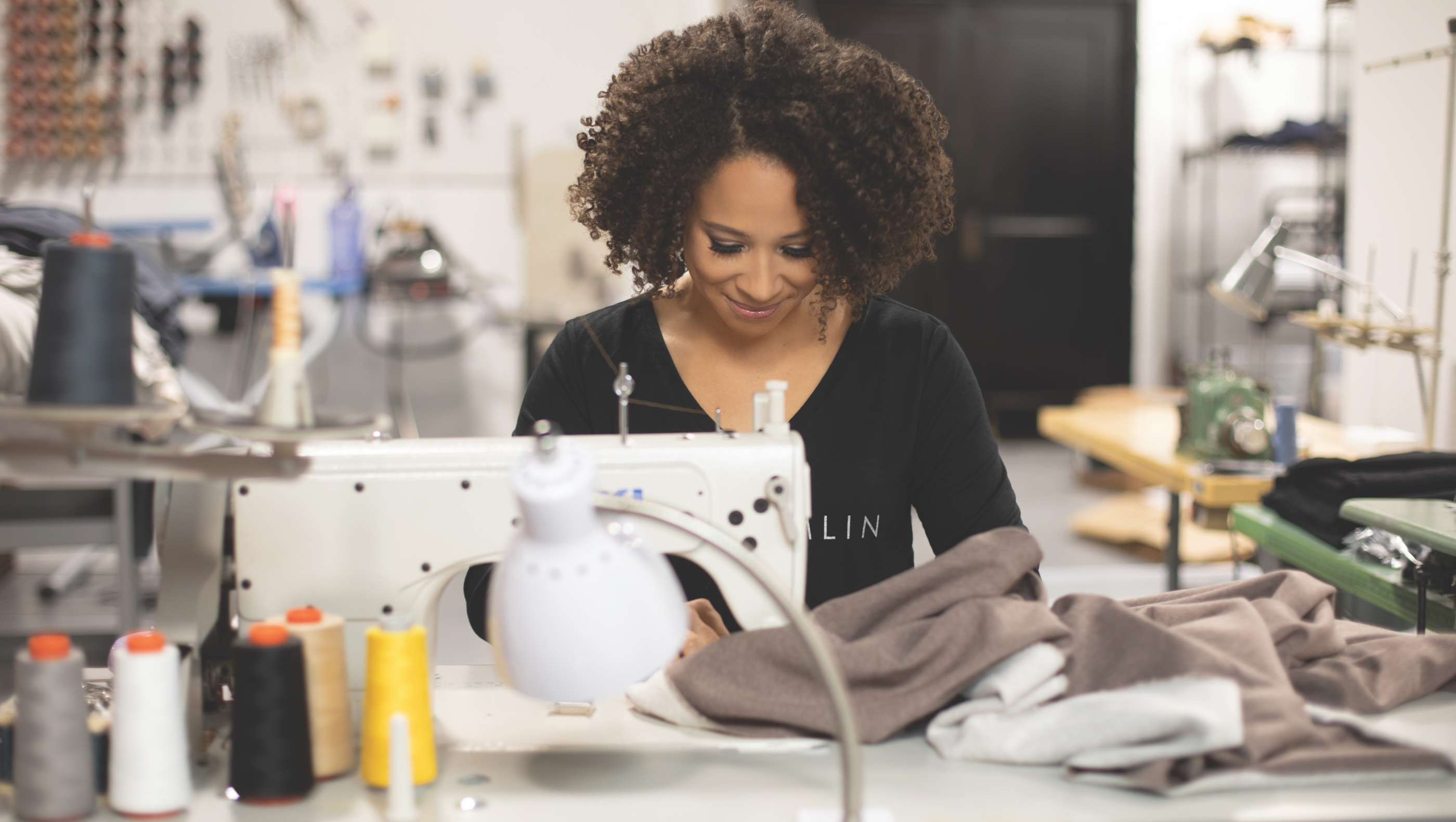 There is an image that is woven into Kiya Winston Tomlin's '96 mind like a well-made garment. It's crisp and unforgettable.