Though we call ourselves a college, William & Mary has been a university since 1779, when our law school, the first in the United States, was created. We are now a university with undergraduate, graduate and professional programs, centered in five schools – arts & sciences, business, education, law and marine science. Over the past 50 years, William & Mary has also become a research university committed to expanding the frontiers of human understanding and helping to meet society’s challenges. And we have become that rare research university still powerfully invested in teaching, especially undergraduates. The result is a William & Mary of great range and quality. There is much cause these days for confidence in the Alma Mater of the Nation.

Let me mention a few highlights of last year.

In December 2013, the arts & sciences faculty adopted a path-breaking new framework for William & Mary’s undergraduate “general education” requirements, which had last been revised in 1993. The revisions affect about 25 percent of the undergraduate curriculum. The new framework is called the College Curriculum (COLL). Faculty members are now preparing to launch COLL for the fall 2015 entering class. It will extend over all four years of the undergraduate experience and provide more interdisciplinary and international work than has been the case before, as well as renewed emphasis on written and oral communication. There will be a significant research component for all undergraduates from their freshman to their senior years. In June 2014, the Andrew W. Mellon Foundation awarded W&M a $900,000 grant, distributed over four years, to support implementation of COLL. These types of grants from the Mellon Foundation are highly prized, and ours is a testimony to the potential Mellon believes COLL has as a model for effective liberal arts education in today’s world.

In the September 2014 U.S. News & World Report ranking of universities with a “strong commitment to undergraduate teaching,” W&M was tied for second among all universities, surpassed only by Princeton. Overall in the U.S. News sweepstakes, W&M ranked 33rd among all national universities, public and private, and 6th among publics.

The undergraduate Class of 2018 was selected from a pool of more than 14,500 applicants. This was the 10th consecutive year W&M had a rising number of undergraduate applications. We enrolled 1,511 freshmen in August, including 22 in the St Andrews-W&M Joint Degree Programme. Eighty-one percent of the students who have a class rank graduated in the top 10 percent, and 2014 freshmen had a median SAT score of 1370 on math and critical reading. The SAT profiles of our entering classes are consistently among the very strongest of all public universities.

Last year, W&M had more Fulbright awards per student than all but one other university, public or private. This fall, W&M ranked first among public universities in the U.S. in percentage of undergraduates studying abroad. In fact, nearly 50 percent of our undergraduates participate in study abroad or institutionally-supported international research. The W&M Debate Society, currently the top-ranked public university debate team in the nation, took top honors this fall at a tournament at Harvard, beating varsity teams from Brown, Yale and Princeton.

In the March 2014 U.S. News rankings of graduate programs and professional schools, William & Mary Law School climbed nine spots to 24th in the U.S. This is the highest rank ever given the country’s oldest law school by U.S. News. Our School of Education also remained in the top 40, ranking 39th among the nation’s education schools. In the Raymond A. Mason School of Business, Bloomberg Businessweek ranked our undergraduate program 22nd out of the teeming horde of undergraduate business programs nationally.

The impact of research at W&M is both local and international. For instance, our scientists in geology and at the Virginia Institute of Marine Science are working on the vital matter of sea level rise using sophisticated modeling and GIS technology. W&M neuroscientists are making progress on apnea in premature babies. Faculty in arts & sciences and at the School of Education are working on ways to improve the quality of STEM education in K-12. The impressive work at the Law School’s Lewis B. Puller, Jr. Veterans Benefits Clinic is providing a model for other such initiatives around the country.

W&M’s staff are unsung heroes, but they are essential to many aspects of the life of the university. Last spring, we honored one of those campus heroes, Ernest “Vinnie” Russell, with our annual Duke Award. W&M’s campus is often named among the most beautiful in the nation. Vinnie, who is in his 35th year at W&M, is responsible for maintaining some of our most high-profile outdoor spaces such as the grounds of the Alumni House, the Sunken Garden and the Wren Yard.

Despite a pervasive lack of salary increases for state employees since the Great Recession hit in 2008, we have been able to make progress on compensation for our faculty and staff. For the second year in a row, we were able to provide meaningful merit-based increases.

William & Mary continues to determine what areas of our educational experience can be delivered effectively and efficiently through digital means. Several projects with an e-learning component were announced in June, including a planned 12-credit hybrid (online and in-person) certificate program in college teaching at the School of Education. This program will be the first of its kind in Virginia. In addition, arts & sciences innovations last year included two online summer courses and “flipped” courses in English literature, computer science and applied science where students learn the core material online and come to class to discuss concepts and explore their implications with their professor and classmates, without the need to devote class time to lectures. The Mason School will begin offering an online MBA in fall 2015.

Almost 100 varsity athletes graduated in the Class of 2014. They won 16 Colonial Athletic Association (CAA) championships and two Eastern College Athletic Conferences (gymnastics) over the past four years, and earned degrees in 22 different disciplines. Forty-two of them earned all-conference honors during their careers, and 29 were inducted into the national honor society for college athletes. Forty of them earned Provost Awards last year for achieving cumulative grade point averages over 3.5. Swimmer Andrew Strait ’14 was named the CAA’s top male scholar-athlete, the third Tribe man in the last four years to receive the honor.

This fall, the Tribe added conference championships in men’s and women’s cross country to raise the total to 116, by far the most of any CAA school. The women’s team won its first regional NCAA title and went on to finish 17th in national championships. In recognition of an outstanding season, Natalie Hall, the women’s head coach, was named the Southeast Region Coach of the Year.

William & Mary has been producing leaders in all walks of life for over 300 years. Our Chancellor, Bob Gates ’65, L.H.D. ’98, was director of the CIA and then secretary of defense for two U.S. presidents. Now in office are our alumni and alumnae who head the FBI, SEC and national park service. An alumna is chief scientist of NASA. Another alumna chaired the Council of Economic Advisers in President Obama’s first term. A W&M alumnus is overseeing America’s largest real estate project ever. And yet another alumnus founded and runs a healthcare conglomerate that delivers services to all 50 states and several countries abroad. And in May, U.S. Soccer named a W&M alumna head coach of the Women’s National Team.

Amid all the success that William & Mary now enjoys, it is crucially important that we also provide a campus environment in which people can do their best work and enjoy their activities while both being safe and feeling safe, especially from sexual assault or harassment. Sexual violence on campus is an ill with which schools across the country are struggling. At the beginning of the academic year, I created a W&M task force of faculty, staff and students and charged it to examine our efforts to prevent sexual assault and harassment of any sort. The task force is looking at the climate that now exists on campus and recommending improvements in how we educate students about and prevent sexual violence, how we train faculty and staff about relevant matters, and how we investigate and adjudicate cases involving rape or harassment. We have made progress already, and our efforts continue in earnest.

In W&M’s first 319 years, the university had just one year in which it raised $100 million. We just reached that mark in back-to-back years, fiscal years 2013 and 2014, and we are moving toward ever greater heights in philanthropy to ensure a future for William & Mary worthy of its past.

William & Mary’s financial future rests on four legs, which we are in the process of building with notable success: (1) innovation on campus to become more efficient, cut some costs and reduce the rate of increase of others; (2) significant earned income (tuition) from both in-state and out-of-state students, coupled with enough need-based aid so that W&M is affordable for students of limited means; (3) alumni engagement and support of the robust sort long enjoyed by our private ivy counterparts; and (4) continued if diminishing support from the Commonwealth.

Essential to the strength and stability of this financial foundation is confidence among all members of the William & Mary family that all other members are doing their part: faculty and staff through productivity gains on campus; students and their families through tuition and fees; alumni and friends through giving for annual support, endowment and bricks-and-mortar; and the Commonwealth through William & Mary’s share of public funds for higher education.

When you combine excellent faculty and staff, smart and intellectually curious students, an administration and Board of Visitors working together and willing to take bold steps when necessary, and a vibrantly engaged alumni body, good things happen. Great things are happening at William & Mary! 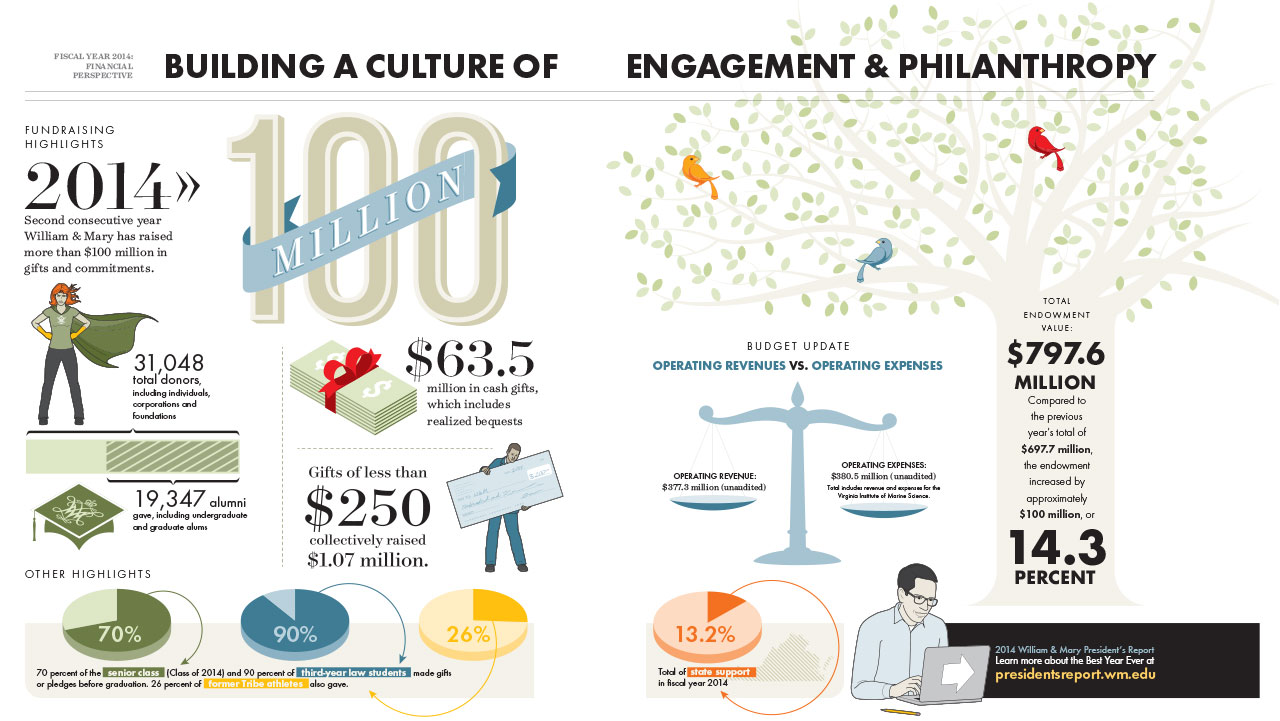