Though they don’t wear trench coats or conduct stakeouts, calling Jeffrey Shields and his colleagues detectives might be the easiest way to explain their role at William & Mary’s Virginia Institute of Marine Science (VIMS).

“A lot of it is detective work, or putting things together and doing lab experiments to figure it out,” explained Shields, a professor in VIMS’ Department of Environmental and Aquatic Animal Health. Using science, experiments and deduction skills, Shields and his researchers work to unlock mysteries worth millions of dollars.

Their nemesis? In the case of lobsters found in Long Island Sound, it’s a disease that causes necrosis of the shell, killing off scores and making the remainder unappetizing for human consumption. The animal has experienced a population drop of more than 90 percent, impacting the surrounding ecosystem and the fisheries that harvest the animal.

“I won’t use the term catastrophic quite yet, but it’s very close to that,” said Shields, who has spent his career studying pathogens that infect crustaceans. “The watermen there basically don’t fish lobsters any more, or they’ve moved to other locations to fish them, or they’ve switched to a different industry.”

The studies that Shields and his team at VIMS conduct affect anyone with a love for crabs or lobsters, and as water temperatures around the world continue to climb, the work VIMS does is only becoming more important.

For Hamish Small, assistant research scientist at VIMS, studying crustacean diseases has a direct connection to growing up in his native Scotland.

“Over the course of his career, my father was a commercial fisherman and diver, then latterly a science teacher,” said Small in his melodic Scottish accent. “It’s no surprise that I became a marine biologist.

“I really wanted to do something that had a linkage to my upbringing, where I came from. One of the draws for working in the marine realm of biology was that it potentially had benefits for the people who fished these animals.”

Small had been studying a parasitic disease of the Norway lobster in Scotland when he met Shields at a conference in Australia. Shields was studying a similar disease in blue crabs at the time, and the two eventually joined forces at VIMS.


For Shields, who has spent the past 20 years studying diseases of the Chesapeake Bay blue crab, one of the more intriguing pathogens is a parasitic dinoflagellate that lives in the crustacean’s blood.

“This particular pathogen lives in the blood of the crab, eventually kills the crab and then leaves it to find another crab, using a dinospore stage,” Shield said. “In some cases we see fall outbreaks of 70 to 80 to 100 percent of the juvenile crabs, so it’s pretty pathogenic.”

Shields and Small recently visited a sampling spot on the Eastern Shore where 100 percent of the crabs were infected with the disease.

“Those crabs are all going to die, so as you can imagine, it’s a pretty serious pathogen, mainly restricted to the high salinity waters of the Chesapeake,” Shields said. “It kills crabs in 30 to 40 days typically, sometimes a little bit longer.”

Aside from impacting dinner plates across the country, the crab die-off will cause other problems.

“They’re a key component of the ecosystem, they predate all sorts of things,” said Small. “If you remove the predator, what’s going to happen to these community profiles? We really don’t have a good handle on that.”

Shields and his team also recently studied an epidemic disease in North Atlantic clawed lobsters that causes bacterial necrosis of the shell. The disease, known as epizoological shell disease, has led to at least a 90 percent drop in the lobster population of Long Island Sound.

“If you’ve eaten lobsters before, you know how difficult it can be to crack the shell on these animals. You use a nutcracker or a hammer to get at the meat,” Shields said. “Just to give you an idea, a lobster with epizootic shell disease, if it’s on the carapace, the upper part, you can literally push your fingers through the affected shell and kill the animal. It’s that easy.”

A number of environmental factors are believed to cause the condition, including rising water temperatures and contaminants like pesticides and oil spill dispersants. The result is that it takes twice as long for lobsters to harden their shells after molting, giving bacteria a longer time to infect the shell while it’s in a weakened state. Female lobsters don’t molt while carrying eggs, and the infection often kills them before the eggs can hatch, because the females cannot molt out of it. 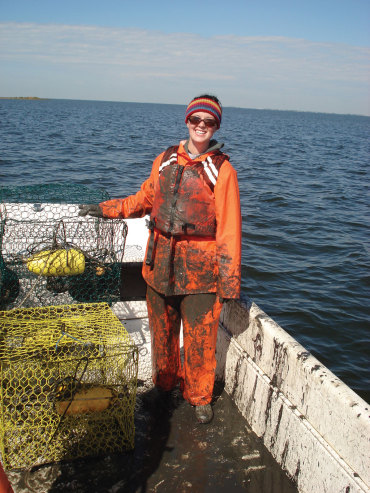 
In addition to affecting the animals and their ecosystem, the die-off has also impacted the lobster fishery. “The southern New England lobster fishery, from southern Massachusetts through New York, is basically shut down by it,” said Shields. “There’s very little recruitment of lobsters in that zone, and the fishery has basically dropped to a tenth of its former value.”

Because of the lesions caused by the disease on the shell of the lobsters, human consumers find the live animals unappetizing, and they can only be sold for canning. For those who make a living harvesting lobsters, it’s the difference between getting paid roughly $6 per pound or less than $1 per pound for the animals.

Shields is currently working with the Maine Department of Marine Resources to be proactive about identifying and deterring the disease in the state, though efforts to stop its migration may be all for naught. As bodies of water continue to get hotter around the globe, Shields said, the escalation and fluctuation in temperature will probably lead to more pathogens infecting crustaceans.

“At 16, 17, 18 degrees above centigrade, that’s where the epizootic disease really takes off.”