In a closing image from the recent television documentary "Fighting Pandemics," Dr. John Dye '92 stands with arms crossed, his face obscured behind the mask of a full-body biosafety level 4 protective suit. He is dressed for battle, ready to take on man's most dangerous and elusive enemy - the virus.

"Fighting Pandemics," the first episode in National Geographic Channel's "Breakthrough" series, focused on the innovative work of Dye and other scientists in fighting the 2014 Ebola outbreak in West Africa. The chief of viral immunology for the U.S. Army Medical Research Institute of Infectious Diseases (USAMRIID) at Fort Detrick, Md., Dye has led a team developing experimental drug treatments for Ebola.

Premiering on Nov. 1, 2015, the documentary ended with a warning from Dye: "If we aren't able to catch these viruses early, chances are they're going to outrun any ability we have to respond."

Officials suspected a link between microcephaly and the Zika virus, which was first reported in Brazil in March 2015 and has spread rapidly throughout Latin America, transmitted primarily by infected mosquitoes. On Feb. 1 of this year, the World Health Organization declared a Public Health Emergency of International Concern in response to the Zika pandemic.


Dye has been called into battle once again, along with thousands of other scientists and public health officials worldwide. "With the Zika virus, it's all hands on deck," says Dr. Christina Nelson '00 of the Centers for Disease Control, another W&M graduate playing a critical role in combating Zika. Nelson serves as a medical officer for the CDC's Division of Vector-Borne Diseases in Fort Collins, Colo. She recently returned from fieldwork in Colombia, where more than 6,000 pregnant women had been diagnosed with Zika as of the end of February.

Because of the lack of confirmed evidence linking the virus and neurological disorders such as microcephaly, a quick and coordinated response by the global health community is especially urgent. "There weren't a lot of people working on Zika before - it was pretty much an orphan disease," Dye says. "What we don't know far outweighs what we do know."

DEEP IN THE ZIKA FOREST
Although Zika is new to the Western Hemisphere, the virus was already on Dye's radar. In connection with his work on Ebola, he has been making semiannual trips to Uganda, where Zika was first identified in a rhesus monkey in 1947. The virus is named for its place of discovery, Uganda's Zika Forest. In an increasingly common "spillover event," the virus jumped from animal to human hosts soon afterward.

"This part of Africa is a petri dish for all sorts of biological agents," Dye says. "So in our work over the last five years, we've been discussing with our Ugandan collaborators what might be the next emerging global infectious disease. And Zika made our list.

"We actually travel to the Zika Forest for collections. Two years ago, we decided to start to collect from Zika patients to try to understand the immune response in those people who were infected," Dye says. "Only about one in five people who are infected have any clinical signs at all. The symptoms are rather mild - a rash, flulike symptoms, lethargy. But we were interested in why just 20 percent were showing signs of the disease and others were not."

As Dye explains, he and his Ugandan counterparts were initially trying to better understand other insect-borne viruses (known as arboviruses) endemic to Africa with more serious symptoms, such as dengue fever and chikungunya. Prior to its jump from Africa, Zika had not been known to be associated with neurological conditions such as microcephaly.

Spreading slowly across Africa and Asia, Zika eventually made its way to the Pacific Islands, where outbreaks were reported in Polynesia in 2013 and 2014. Public health officials speculate that the virus may have traveled along with Polynesian canoe racers to Rio de Janeiro, introducing Zika to Brazil. Because Latin Americans had no previous exposure and therefore no built-in immune response, the disease spread quickly.

Along with microcephaly, Zika has now been linked to eye damage in babies, as well as a rare condition called Guillain-Barré syndrome, which can cause paralysis in adults. Some scientists suggest that children of mothers infected during pregnancy may be at higher risk for mental disorders such as schizophrenia, bipolar disorder and autism later in life.

"It's the $64,000 question, or million-dollar question," Dye says. "Developing the causative link in a human population is a very difficult task, especially in an outbreak population where they're constantly being barraged by different viruses. Everything now is anecdotal, retrospectively looking at the epidemiology."

Fear and uncertainty have led to numerous conspiracy theories - blaming such factors as genetically modified mosquitoes, larvicide and vaccines - all debunked by scientists. As Dr. Bruce Aylward of the WHO recently told the New York Times, "At this time, the virus is considered guilty until proven innocent." 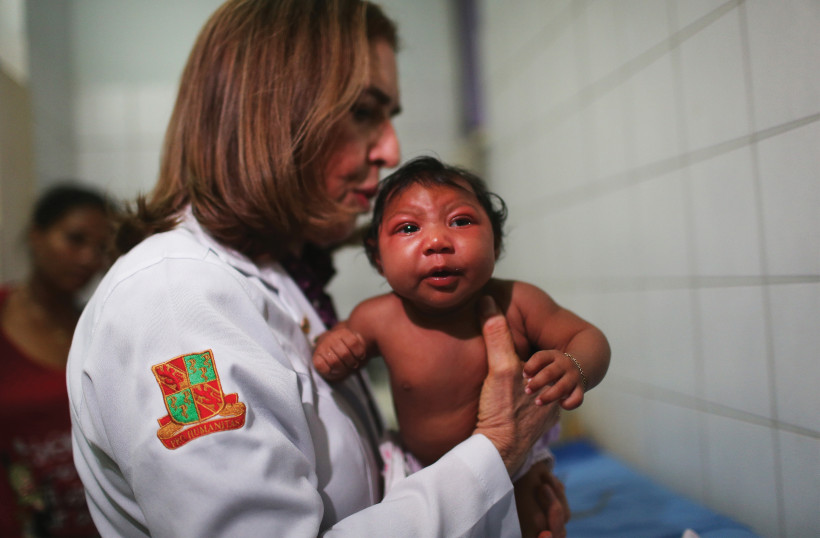 Health officials suspect the mosquito-borne Zika virus may lead to microcephaly in infants. The ailment decreases in-utero brain development, which results in an abnormally small head in newborns and is associated with various other disorders


ON THE GROUND IN COLUMBIA
The response to a global pandemic such as Zika requires specialists on all fronts, from virology to entomology. Armed with both a medical degree and master's in public health, the CDC's Christina Nelson combines clinical and public health roles. She also has valuable international experience, having spent 18 months in Peru on an NIH fellowship studying encephalitis. (She gives a special shout-out to William & Mary biology professors Sharon Broadwater and Eric Bradley for cultivating her love of science.)

Until the Zika outbreak, Nelson had primarily focused on bacterial diseases spread by vectors such as ticks and fleas, including Lyme disease and more rare, potentially deadly illnesses like plague and tularemia. Her work involves a combination of surveillance, epidemiological research, prevention efforts and education, especially for fellow physicians.

One of the biggest things we don't know is at what trimester the infection poses the most risk. That's part of what we're looking in to."

"The other branch here at Fort Collins is the arbovirus division - we work closely together," she says. "When the Zika virus outbreak started, I began helping them respond to inquiries. They were putting a five-person team together to go to Colombia, and because I'd been involved and I speak Spanish, they asked me to be part of it.

"Our team's main role was to collaborate with Instituto Nacional de Salud, or INS, and the ministry of health in Bogotá to build laboratory capacity, increase surveillance and help with prevention on the ground," Nelson says. "We've put the entomologists there in touch with CDC experts on mosquito control. There are efforts underway to control the vector, but they expect the outbreak to continue to grow. So unfortunately, it's raging on."

Because Zika was first confirmed in Colombia in October, five months after the first Brazilian confirmed case, few babies have yet been born to mothers infected with the virus. "Part of our work was collaborating with the Colombians to set up enhanced surveillance of pregnant women who have been diagnosed with Zika," Nelson says.

"One of the biggest things we don't know is at what trimester the infection poses the most risk. That's part of what we're looking into."

Should Americans expect to see Zika come to our shores? "It's very difficult to predict," Nelson says, "but we can use past experience with dengue and chikungunya, because in some ways they cause similar disease patterns. Based on that prior experience, there may be small outbreaks, most likely in Texas and Florida."

Although no cases of locally acquired Zika have yet been in the continental United States, more than a hundred Americans have acquired the virus from trips abroad, including a pregnant woman who gave birth to a baby with microcephaly. The CDC is also investigating several possible cases of Zika being acquired through sexual transmission.

"The most important thing for most Americans is to be updated on travel advisories," Nelson says. "They can go to the CDC website [cdc.gov] to find the list of countries that have active Zika transmission." (CDC is advising pregnant women not to attend the Olympics in Rio de Janeiro this summer and to postpone travel to areas with Zika.) 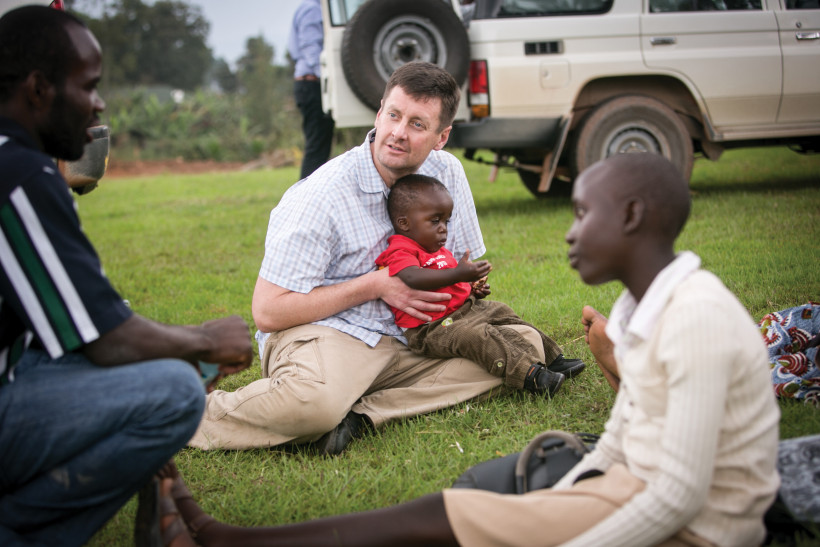 John Dye '92 serves as the chief of viral immunology for the U.S. Army Medical Research Institute of Infectious Diseases


IN A MAXIMUM CONTAINMENT LABORATORY
Like Christina Nelson, John Dye has gone beyond his primary mission - in his case, protecting members of the U.S. armed services from biological threats - to focus on Zika. The virus is a biosafety level 2 agent, so unlike his work with Ebola, he is not required to suit up in protective gear.

"What my lab is doing is supporting other U.S. government agencies such as CDC and NIH in the response against this particular outbreak," Dye says. "So we've been focusing on a couple of fronts here, leveraging efforts that we have ongoing in Uganda. The first is the basic virology of the Zika virus - how the virus infects different cell types, both in mosquitoes and in humans. The second is the development of animal models to test potential vaccines and therapeutics that are developed either here at USAMRIID or elsewhere.

"At the end of the day, I know that my job is to help protect the service member, but I hope what we do goes forward to help all of humankind," Dye says. He noted that all the therapeutics used to treat Ebola in West Africa were developed or assessed at USAMRIID, and that he and his colleagues trained physicians from around the world in how to safely work with Ebola patients.

Dye's laboratory at Fort Detrick operates under continuous negative airflow, keeping the contaminants within contained from the outside world. "It's one of the only places in the world where you can work with some of these deadly pathogens," he says. "So you have to be a little bit adventurous, but you have to be extremely safe and aware. I'm not afraid of it - otherwise it would paralyze you. But you have to respect it. And that's what I teach."

With other viruses lurking in the forest, Dye will no doubt be called on to don his armor once again after Zika has been contained. "I think we're going to need to be prepared more and more for emerging infectious diseases," he says. "The industrialization of previously untouched resources in Africa spreads new fauna into new ecosystems, and suddenly you have a spillover event. Then with globalization, the spread across continents is much, much easier."

He remains confident that humans can eventually outwit Zika and whatever virus emerges next. "With Ebola, it was amazing how quickly people came together and how divisional lines were just obliterated. I think what we'll see from the Zika outbreak is how the whole world coming together can actually solve a problem."