Gum is a third-year student (3L) at William & Mary Law School and a second lieutenant in the United States Air Force Reserve. While her 2L summer was committed to the Air Force, she had a free summer that she wanted to make the most of. In 2014, she accepted the opportunity to travel to Baghdad and spend 12 weeks as a legal intern with the Iraq Access to Justice Program. For Gum, who graduated from the University of Oklahoma with a degree in Arabic and Middle Eastern Studies, it was a perfect fit.

“I decided I really wanted to go back to the Middle East in some capacity,” says Gum, who got in contact with Professor Christie Warren. Warren directs the Program in Comparative Legal Studies and Post-Conflict Peacebuilding, and has consulted on constitutional processes for a number of countries, including Haiti, Ukraine and Kosovo. When she discovered the Access to Justice program, Gum applied immediately.

“After that, it was just getting visas,” she says. “At the beginning of the summer, I flew into Baghdad International Airport and was escorted by a convoy to the actual secure compound. I was given all the security briefings, and introduced to my coworkers.”

“We were kind of like this central nervous system,” says Gum. “We had all these local Iraqi legal clinics that had their own mandates and helped them implement their own initiatives through grants and funding. USAID would provide capacity building with them to ensure they were able to increase their ability to serve.”

Service, in turn, was part of Gum’s educational lineage from the beginning: the Air Force paid for her undergraduate degree, and competitive aid helped to draw her to William & Mary Law School.

“One of the big reasons I came to William & Mary is because they did offer me a scholarship fund that really helped me pursue my education,” she says.

The Iraq opportunity, unique as it was, was funded by grants and donations to William & Mary Law School for international internship opportunities. Since 2002, nearly 100 law students have interned internationally, but Gum’s destination was unique. Thanks to their shared interest in the Middle East, Gum received support from Lois Critchfield D.P.S. ’13, an expert in the Middle East and committed Reves Center volunteer. In 2003, Critchfield gave in honor of her late husband to establish the James H. Critchfield Memorial Endowment for Middle East Studies, but Gum’s summer in Iraq was of special interest.

“She actually contributed specifically because she knew I was going to Iraq,” says Gum. “These are all public service internships, so with contributions to the student, donors are able to have an impact on people in completely different countries.”

By providing legal research to her supervising attorneys, Gum was helping compare best practices in legal aid between European, African and other Middle Eastern nations. Her findings would assist in preparing training and enrichment for the Iraqi legal clinics throughout the country. Her Arabic degree didn’t hurt, either.

“Most of my work was in the compound and occasional visits [to the clinics],” says Gum. “We already had some plans for a program in Erbil, in northern Iraq. We’re all making arrangements to put on this conference for all the legal clinics’ representatives to have some training, but right before we were scheduled to leave for that, ISIS took control over Mosul.”

Mosul is Iraq’s second-largest city, and only about 50 miles from Erbil — about as far as the drive from Williamsburg to the University of Richmond. By June 2014, the Islamic State group (also commonly known as ISIS or ISIL) had laid siege to Mosul, destroying many of its buildings, including the University of Mosul and several ancient tombs. This “created some hiccups,” as Gum puts it, for USAID’s plans in Erbil. But it didn’t mean that her experience was suddenly put on lockdown. 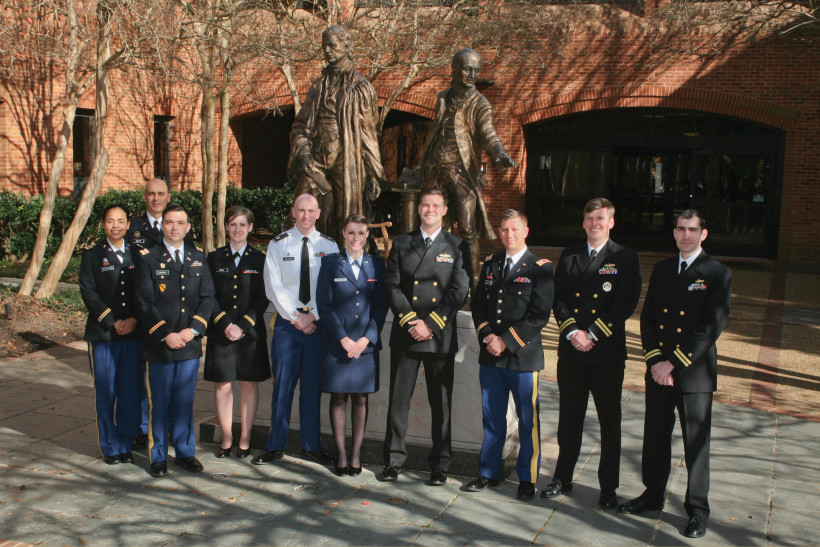 IN UNIFORM: Gum (center) is a second lieutenant with the United States Air Force, on educational delay for her law degree. When she graduates, she hopes to be accepted into the Judge Advocate General program.
Photo courtesy of Kaylee Gum
“In the time after Mosul fell, I spent the rest of my internship in Erbil,” says Gum. “I had full freedom of movement to get out and explore, but it also gave me a perspective from the Kurdish standpoint, as well, which I wasn’t expecting to get.”

Today, with Kurdish forces weighing a fight to retake Mosul, the region is more relevant than ever. The path to a free and fairly governed Iraq isn’t clear yet, but Gum is optimistic.

“The [Iraq Access to Justice] program is now complete,” she says. “It is my hope that myself and the broader program was able to instill basic capacities, skill sets and knowledge. When the country does start to move forward and overcome some of the security concerns, they will have the tools in place to ensure that their population has access to justice and equality under the law.”

As for Gum, she plans to join the Air Force JAG corps and eventually continue pursuing international law. In the meantime, she is on William & Mary’s moot court team and volunteers with the law school’s Lewis B. Puller, Jr. Veterans Benefits Clinic. It continues to be all about service.

“I’m still committed to serving the Air Force,” she says. “Going into the military is going to not only help me serve my interests in international law, but also give me the opportunity to serve, which is something I’ve been committed to for a long time.”