NO STOPPING HER: Jean Shuler ’63, on top of Switzerland’s Mt. Blanc. She has hiked to the top of Mt. Whitney, run marathons in London and Barcelona, and explored Machu Picchu and Cuzco. “I’m planning on running until I drop,” she says. Inset: Shuler at Lawrence Livermore National Laboratory in the 1970s.
Photo courtesy of Jean Shuler ’63


If you’re an opera singer performing in the San Francisco Bay Area, odds are pretty good that Jean Shuler ’63 is in attendance. If there’s a young woman looking for an introduction to a science career, Shuler is there to help. If there’s a supercomputer at one of the most complex laboratories in the country, she might also have been involved. And if there are tourists standing in the parking lot atop Mount Diablo — the highest point in the East Bay — they might just see Jean Shuler, too.

Because she ran there.

“They’d look at us like we were from outer space,” Shuler says. She and her friend decided one day to run to the peak east of Oakland — elevation 3,849 feet — where they met the folks who merely drove there. Running has been in Shuler’s blood for decades, from her earliest years at the Lawrence Livermore National Laboratory.

“The weapons division challenged the computing division to a small run, and they needed a woman,” Shuler says. “So then I had to train and kind of got hooked on it.”

Throughout her 44-year career at the lab, running has provided both a chance to meet people and a way to work through difficult problems in the office. For a workplace concerned in large part with the United States’ nuclear arsenal, those problems might require some very long runs.

“Even if you’re running with people, you can just clear your mind,” she says.
Shuler was born in Kalispell, Mont., a stone’s throw from the Canadian border, before moving to South Dakota and eventually suburban Washington, D.C. As a young woman, she gravitated toward math and science even as her father tried to nudge her into more traditional roles for the time.

“He made me take typing while I was in high school so I could become a secretary,” she says. “So I could always get a job.”

But the pull of a STEM career — although in the late ’50s there was no such term — remained. At William & Mary, she declared a math major without much idea of what to do with it. Still, Shuler enjoyed her courses in chemistry, physics and especially astronomy. After graduation, she found work as a mathematician at NASA’s Langley Research Center in Hampton, Va., close to the career her father intended for her, but not quite.

“I sat in the office with the secretary because they never knew what to do with me,” Shuler says. “I learned programming — there were women in programming but there were no role models at all.”

William & Mary didn’t have any computers at that time, so programming was the first of many new disciplines Shuler would learn over her career. In 1968, she moved with her then-husband to California, where he began work at Lawrence Livermore National Laboratory (LLNL). At the time, the lab refused to hire spouses, so Shuler, despite her experience, had to look elsewhere. After a number of years working for a Bay Area engineering firm, LLNL changed the rule in 1972 and she began her long career in Livermore.

“I’m just trying to get the right people who have the passion for the mission of the lab, and who care about national security.”

“I started as a computer scientist working for mechanical engineers,” she says, “and I went to some of the weapons programming. Then I worked for the National Energy Research Supercomputer Center, where I was more of a systems programmer.”

In over four decades at the lab, Shuler also did work in data storage, graphics and user services. Today, she is a workforce planning manager and technical consultant for LLNL’s high-performance supercomputer. While in the ’70s, the lab was primarily focused on managing the U.S. nuclear stockpile, today, she notes that the work is much more wide-ranging.

“We have biotechnology and all kinds of mechanical engineering projects,” Shuler says. “We do a lot of collaborations with companies outside the lab for technology transfer.”

The scope of the corporate partnerships at LLNL is staggering. Shuler’s office is in a fairly nondescript office building on the lab’s vast campus, but the high-performance supercomputer is just down the hall. Sequoia, the system installed there — in a 48,000-square-foot, column-free, climate-controlled room large enough for a skating rink — is the fourth-fastest computer in the world. The experiments that it runs are among the most complex anywhere, and an ongoing collaboration with Red Hat, which runs Sequoia’s Linux architecture, keeps it running smoothly. Soon, Sequoia will be supplanted by an even more powerful system named Sierra. So for her part, Shuler must help the lab recruit smart, committed engineers who are ready to adapt to LLNL’s unique set of demands.

“I’m just trying to get the right people who have the passion for the mission of the lab, and who care about national security,” she says. “A lot of people shy away from that because they want that Lamborghini to drive around, but Livermore is a nice town; it’s a nice community to live in.”

Nestled in Northern California’s Tri-Valley region, Livermore has a walkable, quaint downtown, nearby wineries and plenty of arts organizations to keep it lively. Shuler is a committed patron of the Livermore Valley Performing Arts Center and its stately Bankhead Theater. The theater hosts Stanford seismologists, Gaelic music ensembles, musicals and films. Shuler supports all of them. To raise awareness for the arts, she hosts small groups of 20 friends in her home to listen to world-class music in an intimate setting.

“[Prominent operatic baritone] Eugene Brancoveanu offers himself up to come to your house and sing for you, and I’ve bid on him twice,” she says. “Somebody else outbid me this year, but next week I’ve got the New Esterhazy Quartet coming to my house.”

It seems at times, though, that Shuler is never home. The calendar in her office proclaims “NEPAL” as an upcoming destination, and she is clearly excited to discuss other trips in her past — with her William & Mary sorority sisters. 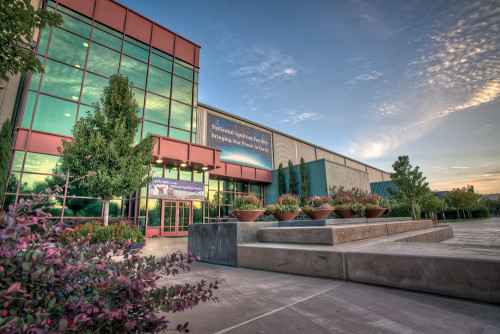 
“I was a Tri-Delta,” she says with a smile. “We’ve kept in touch for years. On our 70th birthdays, there were 11 of us who went to a big place in the Shenandoah. We went whitewater rafting, ziplining and bike riding.”

Shuler says that the class reunions played a big role in keeping her sisters close. “When you go back to a class reunion, it’s like you were never apart,” she says. “You just pick up from where you left off. People have such changes in their lives — good and bad — but we’re very supportive. Everybody liked each other.”

Even more than a half-century removed from William & Mary, Shuler takes the ethos of a female support network to heart in California. She’s a past president and current member of the board of directors for the Expanding Your Horizons Network, a group that helps girls and young women connect with role models in STEM careers. For Shuler, that’s a gift that she never had.

“I’ve been involved with doing facilities, fundraising, hall monitoring, VIP tours, chairing the conference, gosh, since 1986,” she says. “We get hands-on workshops from chemists, veterinarians and dentists where they hold an hour-and-a-half workshop. Girls get to build things, make DNA, take apart computers and everything. The girls just love it.”

Any young women who might be nervous about a STEM career, Shuler says, ought to just jump right in anyway. After all, her career has been a series of new adventures. Whether it’s running up a mountain, programming a high-performance supercomputer or ziplining with her sorority sisters, she seems proud to be a successful role model for the Expanding Your Horizons girls.

“I don’t know what they think of me,” she says, “but I do provide mentoring and fun. And I can show them the kind of career that I’ve had.”