When people ask what Melissa J. Moore ’84 does for a living, she often says, “I work for you.”

That was literally true when the biochemist and molecular biologist received federal funding for her academic research. And in an important way, it still is. As the chief scientific officer of platform research at Massachusetts-based Moderna Inc., Moore is a key part of the biotech company’s effort to produce 200 million COVID-19 vaccines for the U.S. government to distribute to Americans across the country.

“It’s a way to draw people in,” Moore says of her response to the question. “It’s so important for scientists to be out there communicating with the public. We are in it for the public good.”

She’ll have a chance to speak to a global audience during a livestreamed Dec. 17 hearing, when she addresses a Food and Drug Administration advisory panel considering whether to recommend emergency use authorization for the vaccine known as mRNA-1273. Produced by Moderna in partnership with the National Institutes of Health, it would be the second vaccine to receive such authorization, following one produced by Pfizer and BioNTech that began arriving at destinations nationwide on Dec. 14. Moderna officials say that about 20 million doses could be delivered by the end of December.

Both vaccines use genetic material called “messenger RNA” to instruct special immune cells to create the SARS-CoV-2 spike protein, which is found on the surface of the virus that causes COVID-19. This imitates a viral infection, prompting an immune response in the complete absence of any other viral components. Like Pfizer’s vaccine, Moderna’s has proven in clinical trials to be highly effective against COVID-19. It also has the significant advantage of being able to be kept at less cold temperatures, making it easier to transport and store.

“I never could have imagined when I was in school that we’d be using messenger RNA to make therapeutics and vaccines,” says Moore, who received a bachelor of science in chemistry and biology from William & Mary and a doctorate in biological chemistry from the Massachusetts Institute of Technology. “It’s amazing that we’re able to do this and humbling that it will have such an impact on humanity. Ten years of hard work led to us having all the resources in the right place at the right time to create this vaccine in short order.”

Moore’s work over more than three decades underpins why Moderna was in a position to develop the coronavirus vaccine. As she describes it, she has spent most of her career researching how cells in humans and other mammals use information in their DNA and transcribe or copy it to RNA as a code for blueprints to make proteins.

“RNA is the temporary blueprint that your cell’s synthesis machinery uses to know what protein to make,” Moore says. “If we know which protein we want to make, we can back-translate to make the sequence into RNA. It’s the perfect technology for a pandemic or for making vaccines very quickly.”

For most of her career, though, Moore’s focus wasn’t on producing vaccines or drug therapies.

“It was expanding our fundamental knowledge of how our biological systems work,” she says. “We were not put here on earth with an owner’s manual.”

As a post-doctoral fellow at MIT in the early 1990s, Moore invented technology to join long RNA molecules together. Her advisor, biology professor Phillip Sharp, suggested that she patent her discovery, but Moore declined because she didn’t see how anyone would be able to produce a drug using such long RNA sequences. Sharp earned a Nobel Prize in medicine for his discoveries related to gene splicing in 1993, while Moore was working in his lab.

“It’s amazing to me to see the progression of the field,” she says. “RNA is considered an unstable molecule. The fact that we solved the problems to make a lot of it and make it more stable is a huge leap forward.”

A Virginia native who grew up in the Shenandoah Valley, Moore attended a high school where, at the time, only 20% of the students went on to college. She and her three siblings were in the minority, all earning advanced degrees.

“My brother Jay has doctorate in American history and teaches in Vermont,” says Moore, who lives in the Boston suburb of Newton, Massachusetts, with her wife, Janet Kosloff; three children ages 17, 19 and 22; a Bernedoodle and a Maltipoo — both puppies being new additions during the pandemic. “My sister, Mimi, recently retired from her veterinary practice in Maine. My brother Chris works for NASA as an aerospace engineer.”

When Moore’s late father became disabled after a farming accident, her mother, Sylvia Moore, attended night classes to earn a master’s degree and resumed her career as a teacher and administrator. Setting an example of service for Melissa and her siblings, Sylvia Moore, who died this past September, also taught children of migrant fruit pickers through an outreach program and served as a consultant with the Virginia Department of Education for developing and assessing the Standards of Learning for Social Studies.

Melissa Moore chose William & Mary “sight unseen,” partly because she didn’t want to go to the same school as her brother Chris, who attended the University of Virginia. Contrasting their experiences, she says she benefited from a smaller environment where she got to know her professors well. Her advisor, chemistry professor Randy Coleman, was especially influential.

“It was a much more intimate learning experience, and I especially appreciated the ability to do research as an undergraduate,” she says. “When I got to MIT, I learned that the courses were no harder than at William & Mary. In fact, William & Mary had much tougher grading. My education was top notch.”

Moore served as a scientific advisory board member before taking on her current role with Moderna in 2016. Prior to that, she had a long career in academia, and she still holds a position as a part-time faculty member at the University of Massachusetts Medical School, where she was a professor and co-director of the RNA Therapeutics Institute. At Moderna, she saw “a once-in-a-lifetime opportunity to be part of an entirely new way of making medicines.”

A lightbulb moment occurred in early 2013, when one of Moore’s UMass colleagues returned from a conference and told her about a poster demonstrating that researchers were injecting mRNA into mice and producing proteins.

“The most common type of viruses that infect us are RNA viruses,” she says. “If viruses can get their RNA into cells, then we should be able to engineer the delivery of our own RNA into cells.”

Using RNA technology, Moderna was able to finalize the sequence for its mRNA-1273 vaccine on Jan. 13, just two days after Chinese authorities shared the SARS-CoV-2 genetic sequence. On Feb. 24, the company shipped the first batch of its vaccine to the NIH for study, and the first clinical trial participants received doses on March 16. A development process that previously might have taken years had been whittled down to two months.

As Moderna’s vaccine heads to distribution, Moore and her team are focused on improving mRNA technology for other applications.

“My group works on how to design the messenger RNA and how to get it to the right place in the body,” she says. “We’re working on the technologies that will be in drugs two or three years from now.”

One therapy on the horizon is a drug that could be used to treat cystic fibrosis. “We’re working on the technology for how to get RNA into a form that can be inhaled and go into cells in the lung instead of being injected,” Moore says.

A vaccine for cytomegalovirus, the leading cause of congenital deafness in newborns, is in Phase 2 clinical trials. Messenger RNA could also be used to treat genetic deficiencies that cause hemophilia and other conditions. The ability to develop vaccines quickly using mRNA could lead to more effective flu immunizations, she says. In addition, Moderna is applying its mRNA technology to cancer treatment by using a personalized vaccine to marshal the body’s immune system against cancer cells.

“We can make vaccines, and we can also provide protein replacement therapies for kids lacking a particular gene — say a metabolic enzyme,” she says. “The applications are manifold. One of our problems is that we have so many possible things that we can do, that we really have to prioritize.”

At the moment, though, Moore is thankful she was in the right place at the right time to be of service during this hour of urgent need worldwide.

“I feel so privileged that we were able to step in and do something about this COVID-19 crisis,” she says. “It’s amazing to be able do something like this for public health.” 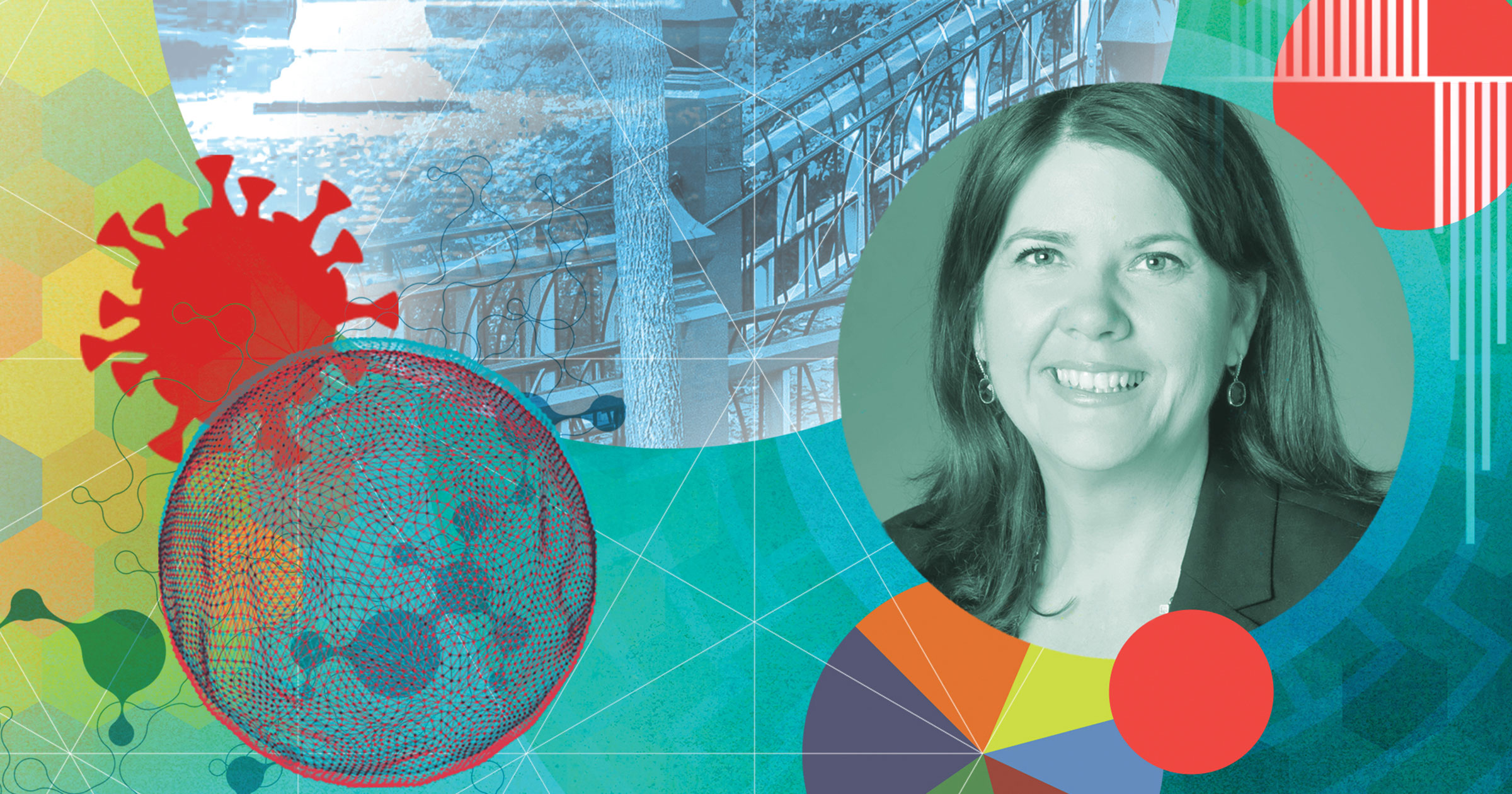 Path to a Vaccine