Well into our fourth century, we refuse to act our age. Let’s act boldly together – every one of us.

“Freedom lies in being bold.” 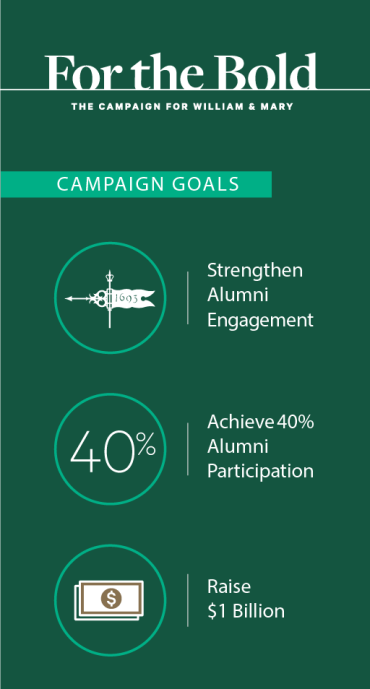 This statement, made by an early 20th century poet, is particularly relevant today as humanity faces unprecedented challenges. From terrorism and economic uncertainty to natural disasters and disease, it is in times like these that
the world needs strategic problem-solvers, innovators and leaders who have the creativity, skills and vision to help overcome some of the greatest threats facing society.

The good news is that William & Mary has no shortage of them. Leadership is integral to the university’s 323-year legacy; it’s part of who we are.

Over the span of several centuries, William & Mary leaders have not only helped define our democracy’s freedoms; they have also defended freedom in every sense of the word. Thousands more have led quietly and ably in their homes, businesses and communities. And all continue to do so today.

William & Mary has a long list of accomplished alumni, including U.S. presidents, a secretary of defense, chief justice of the Supreme Court, top business leaders, a chief NASA scientist, entertainment legends and transformational innovators, as well as public health and veterans advocates.

Many have attributed their success to the educational foundation formed early in their adulthood by faculty and mentors at the oldest university in the nation. For some, William & Mary is where they got their first taste of thinking critically, working collaboratively and receiving hands-on experience leading positive change. It is also a place where students have learned what it takes to be compassionate leaders and to be bold.

It is this theme of leadership that fundamentally defines the most ambitious fundraising campaign the university has ever launched, titled For the Bold: The Campaign for William & Mary.

The university views this as more than just a campaign; it is a necessary step forward toward a more financially secure future for William & Mary and its students. This initiative will strengthen William & Mary’s level of excellence in the classroom and on the field and ensure the university’s continued leadership in the 21st century.

The campaign consists of three main goals, which the university has set out to accomplish by 2020.

This is a campaign for the people, with two-thirds of the $1 billion fundraising goal focusing on scholarships and teaching excellence” -Sue Hanna Gerdelman ’76, Campaign Chair

“For the Bold summons us to strengthen our ties with one another and with alma mater and to help move W&M into the tiny handful of universities whose alumni give annually at a rate of 40 percent or more. Together, we will raise $1 billion,” said President Taylor Reveley following the Oct. 22 campaign launch event in the Sunken Garden.

Reveley joined nearly 800 members of the William & Mary community, including alumni, students, faculty, parents and friends in celebrating the public launch of the campaign. It was at that event that Reveley unveiled a historic $50 million commitment from an anonymous couple, primarily benefiting the campaign’s top priority — scholarships. This gift brought total funds raised during the leadership phase of the campaign — which began in July 2011 — to more than $532 million.

“This is a campaign for the people, with two-thirds of the $1 billion fundraising goal focusing on scholarships and teaching excellence,” said Sue Gerdelman ’76, campaign chair. “We are the smallest public university to launch a campaign of this magnitude and we have a very strong and compelling case for why alumni need to engage with their alma mater like never before.” This is an important point, as the state only supports roughly 12 percent of William & Mary’s total operating budget and this continues to erode every few years.

“The goal is, but is not, $1 billion,” said Provost Michael Halleran. “It is about advancing the distinctive educational excellence of William & Mary.”

At the national level, affordability of higher education is very much a part of the public dialogue. Some presidential candidates have used their airtime to address student loan debt and accessibility. These are areas of great concern for many families in the U.S., including those whose children apply to William & Mary.

“Scholarships are our top priority for a reason. The campaign is an important gateway for providing relief to promising scholars, including financially-struggling students with exceptional ability. Our aspiration is to eventually meet 100 percent of their financial need,” said Matthew T. Lambert ’99, vice president for University Advancement.

About 38 percent of William & Mary students graduate with debt, with an average debt of $25,733. And for out-of-state students, William & Mary only typically meets 56 percent of their financial need, causing students to turn to peer institutions who are often able to offer much more. 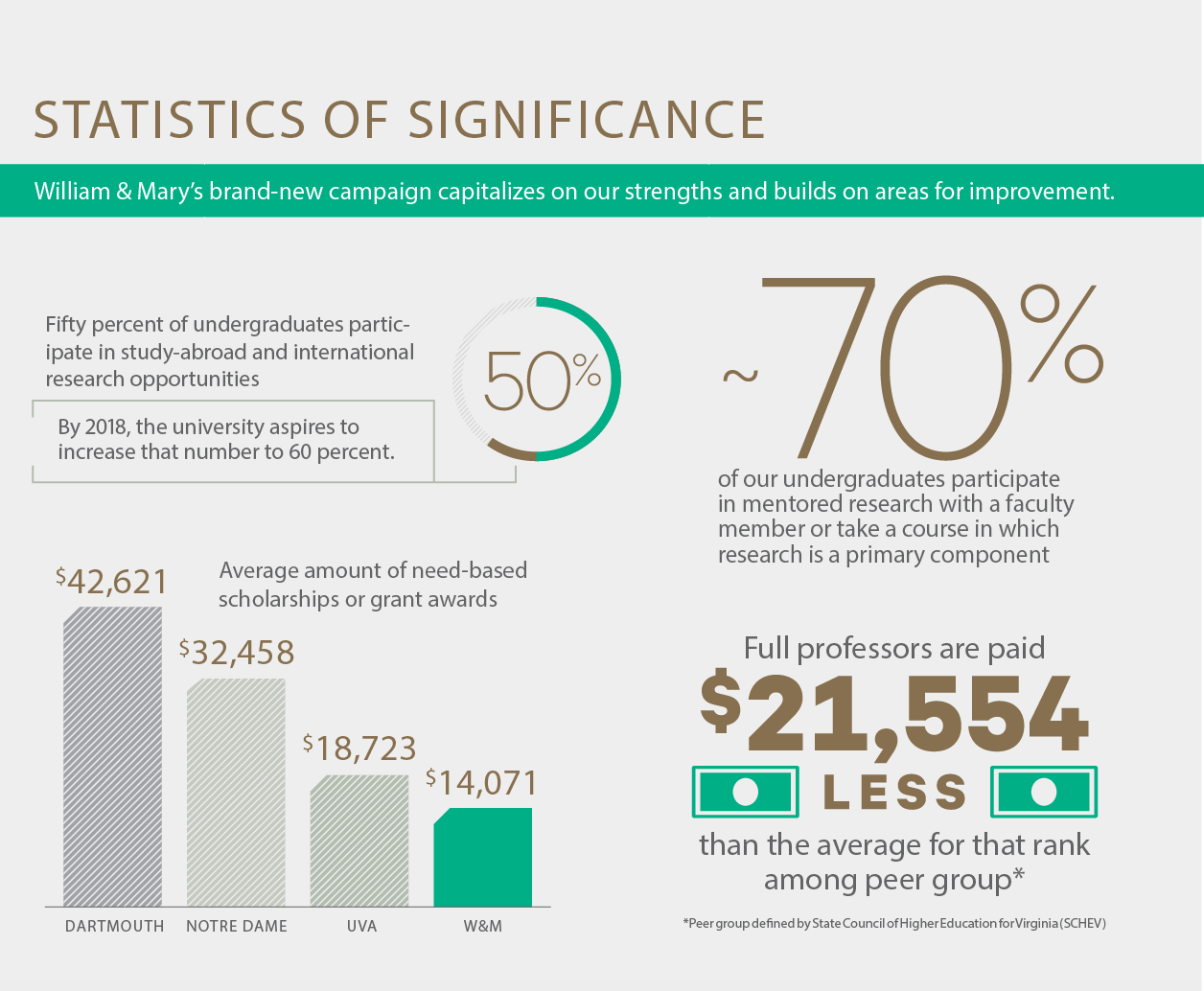 Many students and alumni have lauded the campaign’s focus on scholarships.

“I have friends who work two jobs to pay for their education and support their families, so I think it is a wonderful thing,” said George Patterson ’18 to local ABC-TV affiliate WVEC.

In remarks at the launch event, Chancellor Robert M. Gates ’65, L.H.D. ’98 said that a scholarship from a generous donor — ironically, a cabinet secretary during the Woodrow Wilson administration — brought him to William & Mary and that the scholarship had a significant impact in his life at the time and continues to inspire him today. Gates, who recently gave a gift of scholarships, said that his goal is to help ensure that a William & Mary education is within reach for other remarkable students. And it is very possible that these scholarship gifts can create future bold leaders, like Gates himself.

While scholarships are a big focus, the campaign also touches all corners of the campus. Fundraising priorities include: teaching and coaching excellence; engaged learning, collaboration and innovation; leadership development; international study and research; and, outreach initiatives to promote civic leadership and service.

The campaign will also provide resources to fund alumni programming and career services, state-of-the-art science equipment and enhancements to facilities across campus, among other priority areas. For more information about each of the priorities, visit the For The Bold website.

“This is an ambitious and historic undertaking and it will require a significant increase in alumni participation — an increase from the current 27.1 percent to 40 percent — so that every school and department can meet its fundraising goals,” said Gerdelman. “Every gift, small or large, will have a tremendous impact on the overall educational experience at William & Mary for generations to come.”

Gerdelman said that achieving the 40 percent mark will place William & Mary among the top four national universities for alumni participation.

“Greater engagement and participation among alumni also increases the value of a William & Mary degree as the institution rises higher in public regard,” added Lambert.

Perhaps most important of all, the campaign can help provide the resources for William & Mary to train future leaders from all walks of life, in places near and far.

“We train leaders for communities, for our commonwealth and other states, for our country, and indeed for the world. To keep training leaders, we must even more effectively prepare our students to succeed on a global stage amid a huge diversity of cultures, races, religions and nationalities,” stressed Reveley.

It can be learned early in life or later in adulthood. Boldness can take shape at home, in mid-career or in the halls of power. Everyone experiences bold moments, and everyone has their own way to lead.

Boldness gives a leader the courage and determination to support and protect what all of us hold so dear: the freedom to lead the lives that we want for ourselves and for our families. Whether it is economic freedom, religious freedom, free speech, freedom from threats, free will or the freedom to marry. William & Mary students, faculty and alumni have all had a hand — either directly or indirectly — in advancing these sacred freedoms.

They have done so by acting boldly. 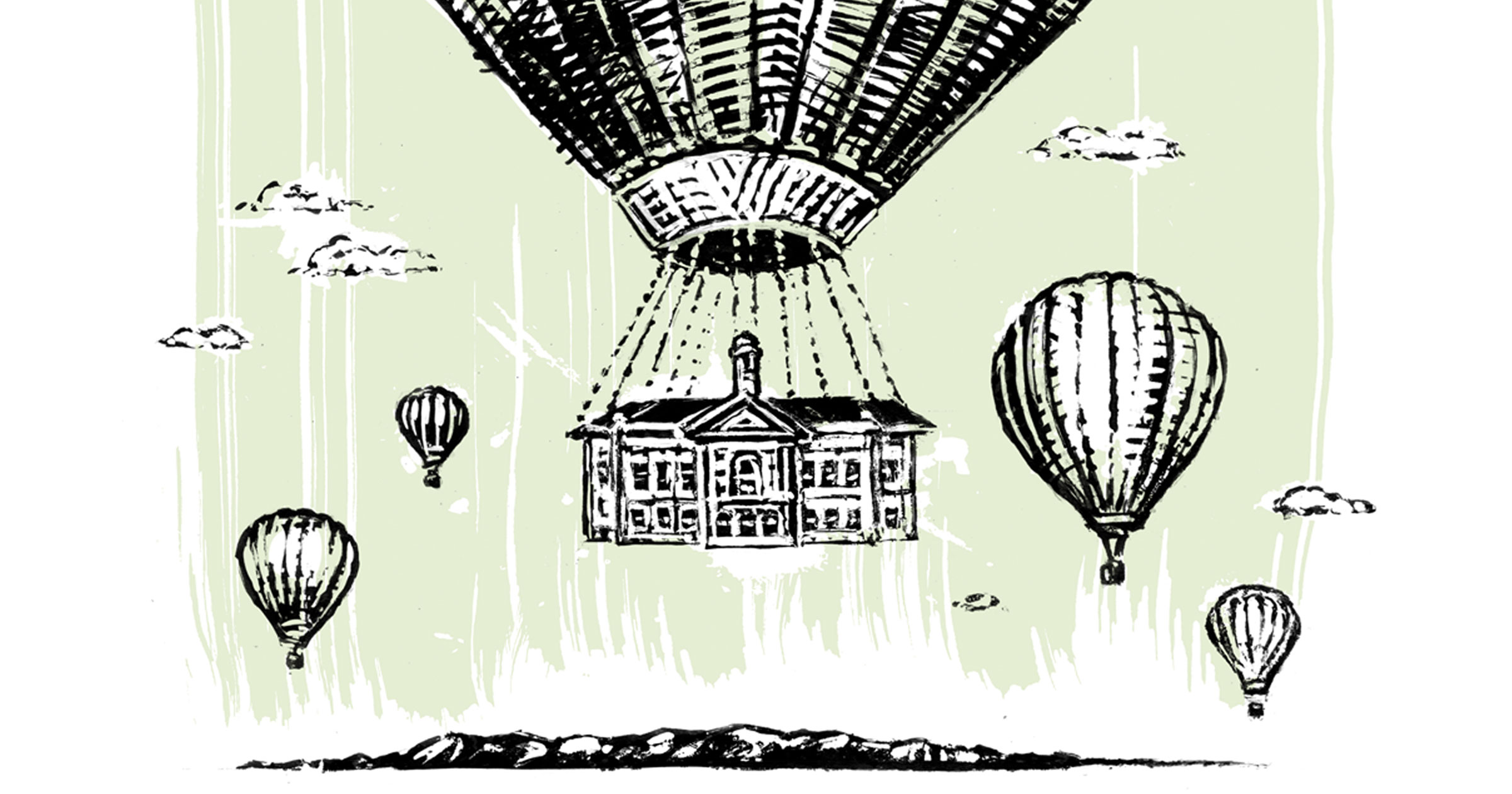