King George III of Great Britain had many nicknames throughout his reign. But who really is George William Frederick? The answer lies among the nearly half-million royal documents housed in Windsor Castle’s iconic Round Tower, many of which have only ever been seen by a select group of researchers.

The Georgian Papers Programme will change that. The partnership between Royal Collection Trust, King’s College London, the Omohundro Institute and William & Mary will digitize more than 350,000 documents from the tower and present them to the public. All of this is in the hopes of transforming our understanding of 18th-century North America and Georgian Britain and its monarchy at a time of profound cultural, political, economic and social change.

Floyd is a member of the Washington, D.C., alumni committee for King’s College London, where she earned her master’s in war studies. In late 2014, she was having dinner in the nation’s capital with the King’s College president and its head of international initiatives. When they mentioned the impending release of more than 300,000 documents from the reign of George III, she felt privileged for the inside information. When they later said they were searching for a U.S. partner to help, she couldn’t help herself.

“I thought that William & Mary and King’s College had a lot of common synergies, including our mutual respect and study of the British royal family,” Floyd says. “I thought it was a wonderful opportunity that quite literally presented itself on the table. I could not have walked away from that dinner without offering the College of William & Mary.” 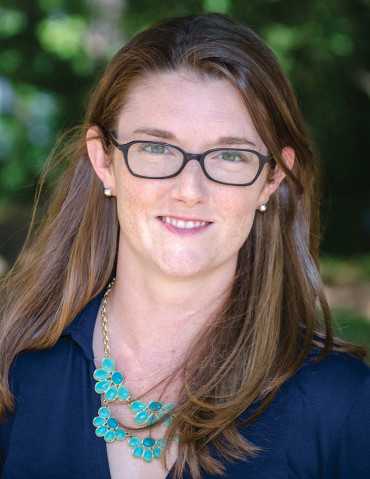 IN THE RIGHT PLACE: Kay Floyd ’05 was the catalyst for the Georgian Papers Partnership between William & Mary, the Omohundro Institute and their UK partners — including her other alma mater, King’s College London.

“I think this partnership shows William & Mary has a tremendous amount of respect, not just in the United States, but internationally as well,” says Floyd. “One of the things I found very striking during my conversations with the Kings College representatives is how quickly they liked the idea of partnering with William & Mary. I think it speaks to our reputation that it was not some long, drawn-out conversation. It was as if the dots were connected, the lightbulbs went off, and this was absolutely the home for the American contingent.”

The first phase of the Georgian Papers Pro-gramme (GPP) — roughly 33,000 digitized documents, including some penned by King George III regarding the American Revolution — were publicly released and accessible at no cost in January. The goal is to digitize and release by 2020 the more than 350,000 documents related to Kings George I, II, III, IV, William IV and other members of the royal family, along with politicians, courtiers and others. Only 15 percent of the papers, spanning 1714 to 1837, have been previously published, mostly in editions.

The project was launched in April 2015 by Queen Elizabeth II, who has twice visited William & Mary — once in 1957 and again 50 years later for the 400th commemoration of the founding of Jamestown.

“Her Majesty fully supports the work currently underway to make the historic treasures of the Royal Archives widely accessible to the world through digital technology,” says Royal Librarian Oliver Urquhart Irvine. “Having the Omohundro Institute and William & Mary as our primary U.S. partners as the program develops is essential in bringing academic rigor, depth and context to the interpretation of key papers that will shed new light on the emergence of the United States of America itself.”

“With our strong connection to the Jamestown landing, I think it’s perfect to bring some of the King George III legacy back to Williamsburg,” says Floyd, “with a more positive bent than the first time we dealt with him.” 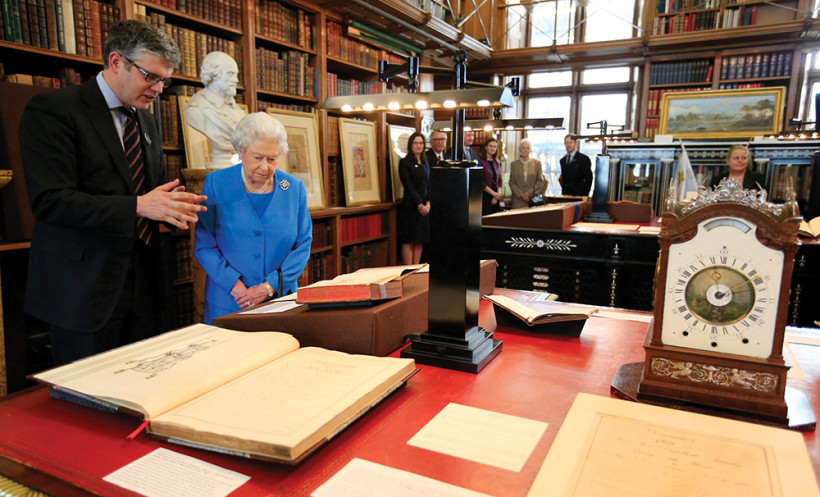 
GEORGE WHO?
When George III took over the throne in October 1760 at the age of 22, he inherited an ongoing world war and changing social issues. Under his sovereignty, the British Agricultural Revolution reached its peak, there was unprecedented growth in the rural population which in turn provided much of the workforce for the concurrent Industrial Revolution, and great advances were made in fields like science and industry. But his time in power also marked some of his country’s most tumultuous times, including the Seven Years’ War against France, the loss of the American Colonies in the Revolutionary War, the French Revolution and the Napoleonic Wars. After suffering from bouts of insanity and mental illness for most of his life, George died in 1820, his life and reign longer than any other British monarch before him.

But to the American colonists in the late 1700s, George III was known as a tyrant. In Britain, he was blamed for the failure of imperialism. The final decade of his life was marked by blindness and insanity, earning him the nickname “Mad King George.”

But the access to his private papers provided by the Georgian Papers Programme may tell a new story about the monarch and will allow us to see George III as more than a political or regal figure. While he spent much of his time in diplomatic meetings at St. James’s Palace, from the documents in the Round Tower we learn George III also enjoyed visiting Spithead to see the ships. He was concerned about the well-being of his children and their education, and the troubled marriages of his siblings. While he never stepped foot on the American continent, his papers reveal that he closely tracked the war through maps and regiment lists. By pouring over these papers, discovering how George III processed his world will allow scholars to further understand the time period during which he ruled.

“This program is opening up years of international decision making, intricate political networks, things that the world has never seen,” says Floyd. “Thanks to the various partnerships that will be a part of this, scholars all over the world will have this new level of access to create connections between different fields of study that simply would not have existed had the Queen not decided to release the papers.” 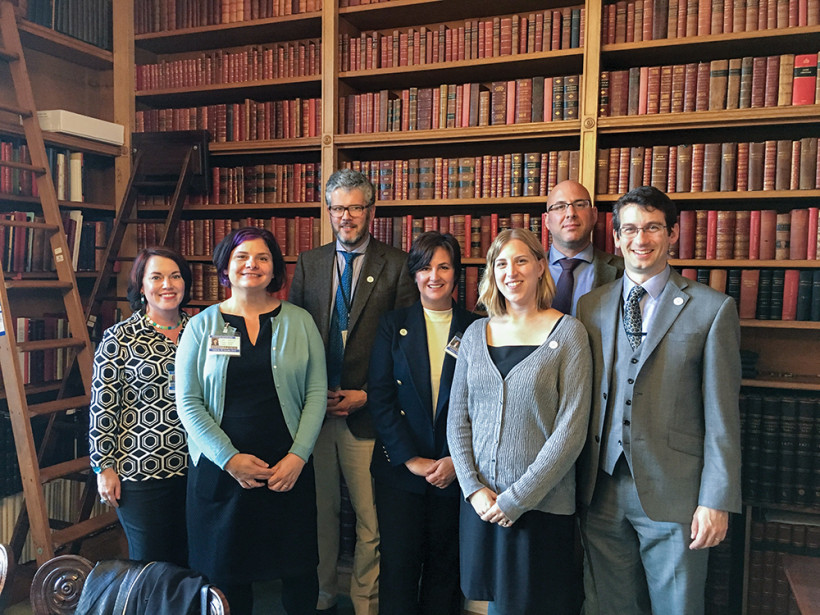 
MYSTERY IN THE ROUND TOWER
To recognize the significance of the Georgian Papers Programme, it’s helpful to understand the choreography of researchers who want to view primary documents in archives and special collections worldwide, explains Karin Wulf, W&M history professor and director of the Omohundro Institute.

Researchers begin by finding the relevant documents they’d like to view listed in the online catalog for the archives or the special collection. They register at the archive, placing their personal belongings in lockers before entering a supervised reading room. Because of security concerns, researchers are often allowed only to bring in a laptop computer and cell phone to photograph documents.

“So that’s what it’s like to work in a typical reader-access-oriented special collection or archival library. Now, Windsor Castle and the Royal Archives are nothing like that,” Wulf says.

As such, the materials have not been fully cataloged, so over the years researchers and authors made educated guesses at what was in the Round Tower and then wrote to the Queen’s private secretary for permission to view materials. Logistically, the Round Tower is not set up for reader services.

“All of this means that there were a very limited number of people they really could accommodate,” Wulf says.

Now, the digitization part of the Georgian Papers Programme will have each document scanned and photographed to create a high-resolution image, transcribed and tagged with descriptions and metadata allowing researchers not only to search the archive but to study and recombine it in new ways – “the kind of new digital humanities work that you can’t do with a paper edition,” Wulf says.

Historians have some expectations about what is in the collection based on known correspondence, global affairs and what has already been published. And, Wulf noted, there are certain documents that could only be housed in the Round Tower.

“Scholars are really salivating as this has come to light and more and more people have learned that there are treasure troves of documents to go through,” says Stephen Hanson, W&M vice provost for international affairs and director of the Reves Center for International Studies.

Indeed, the project and some of its findings are the subject of a BBC Two documentary, “George III: The Genius of the Mad King,” released in January in the UK.

The GPP promises to deepen historians’ understanding about Britain’s role in the world, including its relationships with colonial America, the fledgling United States and other European countries. Scholars also expect insights into British politics, the Enlightenment, science, food, artistic patronage, life at court, the education of royal children and more. The Royal Library is also augmenting the Georgian Papers with another 100,000 pages of its own manuscript material.

“We’re gratified that King’s College said that the Omohundro Institute are the people to work with and pleased that the Georgian Papers Programme recognized OI’s leadership in early American scholarship,” Wulf says. 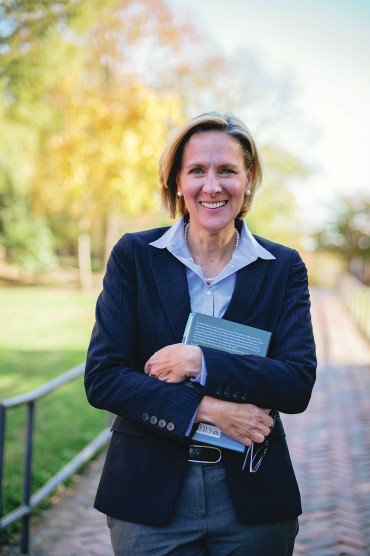 
“This project provides a unique opportunity to work on an international digital project, setting standards for cataloging and digitization that will contribute to the ever-evolving role of libraries in the digital age,” says Carrie Cooper, W&M’s dean of university libraries. “The lessons we learn from this project will inform our work as we embark on digitizing, transcribing and making discoverable unique items in our own collections like the James Monroe Papers, diaries from the Civil War and the Robert Gates Papers. Digitizing our original collections and making them accessible to scholars worldwide is crucial to advancing scholarship.”

The Omohundro Institute, recognized globally as the leader in early American historical studies, is deeply embedded in the program. With funding through its Lapidus Initiative, it has committed to support up to eight research fellowships annually. The first were funded in 2015, along with additional fellowship paid for through King’s College London.

As the research fellows rotate through Windsor Castle’s Round Tower, they help to illuminate what’s in the archive for historians coming behind them. They will also document their findings on the American and British Georgian Papers portals in detailed blog posts.

In 2015, Omohundro Institute-sponsored fellows researched authors of African descent at the Georgian Court and the imperial politics of Scottish emigration to revolutionary America.

“Included in the essays written by King George III are subjects like architecture, military tactics, constitution, all topics,” says Nick Popper, associate professor of history at William & Mary and member of the Omohundro Institute’s Council. “There will be something like 300 essays as part of the initial release, partly because they are among the most appealing sources [for future dissertations and books] that are going to emerge from this.”

In addition to the digitization and fellowships, the project also includes annual conferences, symposia and other events on both sides of the Atlantic. Already the project has promoted a fair bit of intercontinental travel, with faculty and staff from the Omohundro Institute and William & Mary’s Reves Center and Libraries visiting London and Windsor and personnel from the Royal Archives and King’s College London visiting W&M and Washington, D.C.

Next year, the Reves Center is funding a research trip, led by Popper, taking a number of W&M history students to London and the Round Tower. Other history professors are also integrating the Georgian Papers material into their classes at William & Mary this spring.

“This is very likely the last great privately held archive that will illuminate the 18th-century Atlantic world,” says Wulf of the documents at Windsor Castle. “Sure, there is glorious material here to explore on King George III and the lost colonies, but there is also extraordinary material on transatlantic literary culture, on ideas about labor and agriculture, on politics of the highest and the most quotidian sort, of gender, family — all manner of topics. It’s not only the monarchs whose materials are preserved here. It’s the people who worked for and with them, and it’s the materials created by all kinds of people around the British Empire and beyond.”