A student wants to make sure his mother’s memory lives forever. On the anniversary of her death, he will recite the Mourner’s Kaddish and light a Yahrzeit candle. In Judaism, the candle is meant to burn for 24 hours beginning at sunset.

He needs a space on William & Mary’s campus to practice the sacred ritual.

That special space is the Shenkman Jewish Center, the first dedicated facility at the university for Jewish students to practice their faith.

“Attending a nearby synagogue is not the same as having our own Jewish center at William & Mary, where we can decide what kinds of events we host and what types of services we are leading,” says Mollie Schichman ’21, co-president of Hillel at William & Mary. “Already some of my favorite memories of my college experience happened at the Shenkman Jewish Center.”

The center, which opened in the fall of 2018, was funded through a generous gift from Mark R. Shenkman HON ’15, P ’03 and Rosalind Shenkman P ’03. Located at the corner of Jamestown Road and Cary Street, the more than 3,000-square-foot facility includes a kosher kitchen, study lounge, meeting spaces and a sukkah.

The facility, which is owned by the William & Mary Real Estate Foundation, was created to provide a central location where Jewish students can participate in cultural, spiritual, social and educational activities and programming.

“The center feels like it’s here for us — and that we belong here,” says Ephraim Kozodoy ’21, co-president of Hillel.

A Home Away from Home

The center is operated by Hillel, a student group whose mission is to provide Jewish students a place on college campuses to freely express Judaism. In the past, finding places to hold events on campus was an ongoing challenge. Students would meet in different rooms on campus nightly because there was no central location prior to the center being built.

“Our programming problem is now solved,” Schichman says. “Just by having the house we are able to provide so much more to Jewish students on campus.”

“My vision is to reach as many Jewish students as we possibly can and let them know that they have a home here at the Shenkman Jewish Center,” Litt says.

Hillel members say there is an uptick in students attending events hosted at the new center. Kosher food is eaten at many of those events. In February, a caterer was hired to prepare meals at the center. It is the only kosher kitchen in the Williamsburg area, according to Litt.

“One of the roadblocks for Jewish students coming to William & Mary has been not having kosher food available consistently,” Litt says. “By making this available to students, we are widening the opportunities for Jewish families to send their students to the university.”

Kozodoy was raised in Manhattan, New York City, in an orthodox Jewish family where eating kosher was a way of life.
“I come from a pretty religious atmosphere,” Kozodoy says. “We follow all the kosher rules at home. It was impossible to do that here before the center opened.”

Litt says they are still in need of utensils for the kitchen and are currently raising money through Tribefunding.

“We certainly want alumni to look back at their experience at William & Mary and consider what their time would have been like if they’d had a beautiful home on campus like the Shenkman Jewish Center,” Litt says. “Maybe they will be inspired to pay it forward by enabling this experience for other Jewish students.”

Ben Marcus ’22, who grew up in Chicago, sought out the local Jewish community during his first semester at William & Mary. Most of those early interactions were through attending services at a local synagogue.

“It was very intimidating to worship alongside hundreds of people I didn’t know,” Marcus says. “Now that the center is open, it makes me feel like there is a Jewish community on campus. This is a place that we can come together to have Shabbat and Jewish holidays. By having the Shenkman Jewish Center, more students will come to William & Mary.”

This past fall, students celebrated Hanukkah on campus for the first time. Previously, they were unable to light menorahs in dorm rooms because of open flame policies and setting off the smoke detectors.

Weekly programming at the center includes Shabbat dinners, student-led services, game nights and Challah for Hunger. In February, Hillel hosted a Gift of Life event, where bone marrow samples were collected from people with a Jewish genetic background, with the purpose of curing blood cancer.

Sidonie Horn ’22, who grew up in Los Angeles, wanted to attend a university that had a strong Jewish presence. Horn learned the Shenkman Center was being built during her visit to W&M.

“It made me feel really good when I heard about the center,” Horn says. “William & Mary’s Jewish population isn’t super large, but when you have your own space to congregate with other Jewish students it doesn’t matter how large the numbers are.”

Danielle Grae ’21 agrees. “We really want anyone who identifies as Jewish to come here, whether you think you’re barely Jewish or you’re very religious,” she says. “It’s a home for everyone.”

Hannah Chait ’22, from the Bronx in New York City, was initially hesitant about attending W&M. She emailed Litt about Jewish life on campus and found out that the center was being built.

“That made such a big difference because I knew it represented a much more permanent existence of Jewish life,” Chait says.

“I’m in the St Andrews Joint Degree Programme, so when I come back in three years it’s not like Jewish life will be gone. If anything it’s just going to get so much better.”

Litt says the presence of the center has also set William & Mary boldly apart from other universities.

“It really makes a statement to institutions of higher education everywhere that diversity is important to William & Mary,” Litt says. “Putting this building on Jamestown Road makes a major statement that W&M cares about all students who are here and wants to ensure that every student really does have a place they feel safe and comfortable. That was something the Jewish community did not have until now.”

Schichman and other students say they have “immense gratitude” for the Shenkmans creating a home for them at William & Mary.

“They have made a huge difference in the lives of every Jewish student on campus, current and future,” Schichman says. 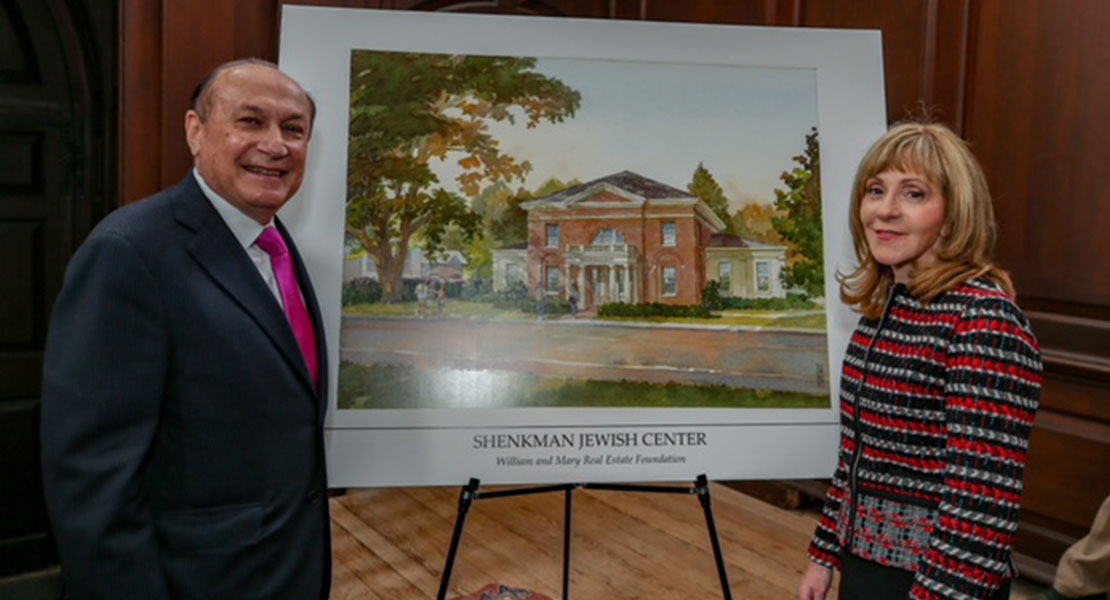 Since last year’s announcement of the Shenkman Jewish Center, members of the William & Mary community have been waiting with eager anticipation for the project to begin. They need not wait any longer — on Wednesday, a large group gathered together to break ground on the more than 3,000 square foot center, which is slated to open in fall 2018.