University Provost Michael R. Halleran has an office full of hedgehogs. Some are stuffed dolls, some miniature statues and others are painted on other knickknacks sitting on bookshelves. He’s acquired them over the years as a reminder of the quote from the Greek poet Archilochus: “The fox knows many things; the hedgehog one big thing.”

Halleran is keeping that quote in mind as he prepares to leave his position as provost on July 1. After a yearlong sabbatical, he will return to William & Mary once again as a professor in the classics department, but with just months left in a 10-year tenure as provost, Halleran is at the end of an era. He’s about to move from the Brafferton to Morton Hall, tying loose ends and keeping things as smooth as possible.

So we stopped by Halleran’s office to ask him some questions about life, legacy and everything in between. He, in characteristic hedgehog fashion, gave us some big answers.

A quick Google search will show a large number of programs at William & Mary attached to the name Michael Halleran. What programs that you've helped develop in the last ten years have been the most rewarding?

“Let me begin with the necessary, if obvious, disclaimer that the things that have happened during my tenure have rarely, if ever, happened because of me alone.

But to name a few, we have a new gen-ed curriculum, the COLL Curriculum. It’s not the provost’s job to establish a new curriculum; that belongs to faculty. So I was very pleased with what they came up with. It’s not the curriculum I would have done if it was simply left to my own devices — it’s fundamentally better. One of its most impressive features is the degree to which it is interdisciplinary, integrating different domains of knowledge.

There’s the William & Mary Promise, which was a combination of bringing in more revenue but also creating greater predictability and affordability for in-state students. That was fundamentally a very good thing, in part because it made the institution more affordable for Virginia students. Our goal, obviously, is that no one not come here because of finances.

The student body is really very impressive, and again, I’ll give credit to the people in admission. We’ve grown a bit, and by the usual measures of SAT, class rank, we’ve become slightly stronger. It is a more diverse student body, and a more international one. So to do all those things without any loss, but in fact a slight increase, in quality is pretty impressive.”

What kind of things have you found at William & Mary that you haven't found anywhere else?

“There is not a single public university like William & Mary. Full stop. Unequivocal statement.

We are different in two very appealing ways. One is our balance, our blend of teaching and research. I usually say it’s like Goldilocks. Goldilocks visits the large public research university and says ‘This is too big, too impersonal.’ Then she goes to a small, elite liberal arts college and goes, ‘This is too small.’ Then she comes to William & Mary and says, ‘It’s just right.’

So every school has to find a balance, and we find a balance that I think is particularly attractive. You combine faculty who are first-rate scholars with a strong, strong commitment to undergraduate education, and undergrads get more attention than almost any place on the planet. Having a 11:1 student: faculty ratio doesn’t hurt. Our graduate and professional programs are of very high quality and their typically modest size allows for the same high level of interaction between faculty and students that we find in our undergraduate programs.

The other way in which I like our blend is that we do a lot of different things and do them very well. If you look across the spectrum, we have a good mixture.”

What excites you about returning to academia as a professor?

“From high school on, with a few distractions about other careers, I wanted to teach. I think it’s one of the greatest jobs on the planet, and I’m eager to return. Every course I’ve ever taught I’ve enjoyed.”

Your academic focus has primarily been in Greek and Roman Classics with an emphasis on the Greek tragedy, so if you had to compare yourself to any character from the classical plays you've read, who would it be?

“Hmmm. I’m going to go with Odysseus. He’s a survivor, he lasts a long time, he has many adventures and unlike some others, he returns home. One of the common myths or motifs in Greek mythology, the return of the hero, is often fraught. But Odysseus comes back and reaffirms his role as husband, as father, as son after this extraordinary set of adventures. So, yeah, I’ll go with Odysseus.”

What's one thing you want to do before you step away at the end of the semester?

“We’ve recently announced the impeding launch of a Studio for Teaching and Learning Innovation. It’s been in the works a while, and I want that to be up and running before I go. We have a university that truly does value teaching, but unlike almost all our peers, we have no such locus of activity where people can change how they teach, improve how they teach and  learn from each other. It will evolve in particular ways, but this will be its focus, so I’m very pleased and looking forward to having that set up.”

There are other odds and ends, but I have the goal to leave things in as good shape as possible for the new provost When my job ends on July 1, I can offer advice and serve as a source of information, but it’s my job to just get out of the way after doing the best I can.”

Any initial impressions of the new provost, Dr. Peggy Agouris?

She has had an extremely successful career as a researcher, and also has great administrative experience, having served as a department chair, center director and dean of a large school. I like her energy and style of interaction. I think she’ll do a great job as provost.

So with that in mind, when you think what the future looks like in a post-Provost-Halleran world, what do you think is left to accomplish?

“Oh God, I think there’s only going to be chaos and ruin when Halleran steps down…

Sorry, bit of sarcasm there.

We do have a disconnect between our operating model and our financial model. We operate as an elite private university, but our finances are that of a public institution. And so there is a tension there, a tension that I think that has to be smoothed out a bit. I don’t think we want to change our fundamental ethos — to use another Greek word — but we will make changes. What we don’t know is what’s going to be the pace of change.

President Rowe has a most felicitous formulation: change allows you to preserve what you value the most. We really offer a remarkable education — and I’m totally biased. I’ve been provost for 10 years, our youngest son went here. We are stronger than we were 10 years ago; I firmly believe we’ll be a stronger institution 10 years from now, but there will be change, and that can be scary.

Do you have any good stories from your son’s time here?

“So you can be the son or daughter of the provost and no one really knows. One of the things that I do is decide when to close campus for storms or whatever. So Andy, our son, explained this to his classmates, and they said, ‘Oh, he’s the weatherman.’

He would sometimes have good ideas for me, and tell me what to do. I would say, ‘good idea, Andy,’ and usually ignore him. But it was fun to have him here.”

Stepping away after just the first year of a big transition into the presidency of Katherine Rowe this year, what excites you about the new administration?

“We have a new administration? No one told me.

In all seriousness, I worked with Taylor Reveley for nine years, and I’ve worked with Katherine Rowe for less than a year. Both are extremely impressive, and I’ve deeply enjoyed my partnerships with them. The transition has been as smooth as it possibly could be. Katherine thinks about things very differently, and she understands the university remarkably well for someone who still is fairly new. There are differences in style and background, but they both have a deep, deep appreciation of William & Mary. Taylor proved himself to be an extremely effective leader over the long-term, and I believe Katherine will as well”

Now for some quick hits. First, and I think most importantly, why did you decide to grow the beard?

“I’ve had a beard off and on throughout my adult life. In college, as a renegade, I did. So no symbolism. I, just like many, was on vacation and said ‘why shave?’ and came back and said, ‘why shave?’ It’s not forever, at some point I’ll get rid of it.”

I've seen you eating hot dogs at Retro's diner on Prince George Street before — is that your favorite local restaurant or does another one stick out?

“I like Retro’s. It’s in my top three. I also like Oishii, although it seems now to have closed operations. Oh, and Dog Street Pub — I’ll give them a plug as well — along with Bangkok Garden up Richmond Road.”

“I have no talents whatsoever, hidden or otherwise.

Hm. I’m reasonably funny, though some people would  dispute this. But I’m not sure I have a hidden talent — put down ‘none.’”

“I’ve been tempted. Actually one of my favorite student evaluations years ago was that I should be a stand-up comic.

Besides the weatherman one, do you have any good stories from students over the years?

“So actually back to weather. Three years ago, I think we had several days that were on the cusp. Maybe you close, maybe you don’t. So I got an email from a student begging me to close so that she or he — I can’t remember — and classmates could have a snow day to remember. A compelling reason to close campus, no?

If you had to describe the job of provost in just a few words, what would those be?

“Consistently varied and at times downright unpredictable. It keeps me on my toes.”

What’s something you can only tell by meeting you in person?

“I’m a huge Seahawks fan. I lived in Seattle for 20-plus years, and that’s my team.”

Must have been tough a few years ago in the Superbowl.

“Awwww, you had to bring that up. Just give Marshawn Lynch the ball …” 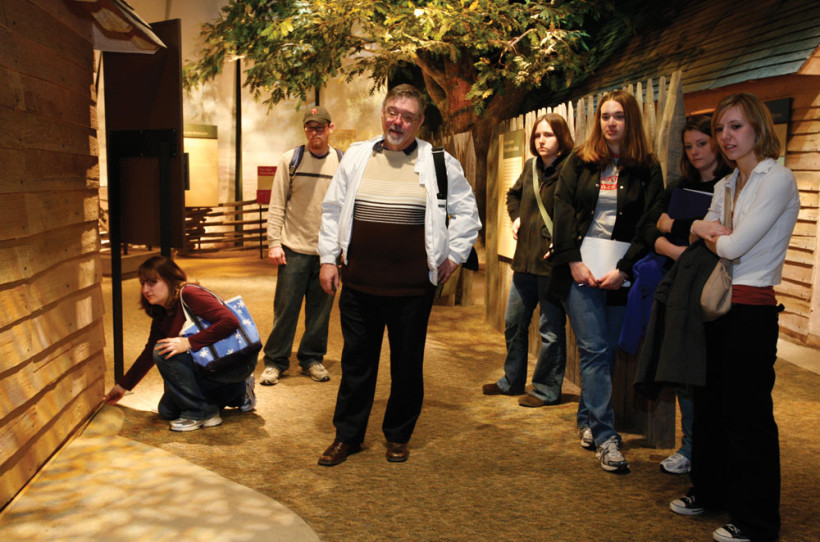