Echoes of century-old racial violence and oppression reverberate through generations in the fictional world of the HBO series “Watchmen.” There are deadly traffic stops, hidden identities, corrupt police officers and vigilantes who carry out their own forms of justice and revenge. Also, it rains squid from time to time.

Sound at all familiar? (Aside from the falling squid, that is.) Cord Jefferson ’04, an Emmy-winning writer for the series based on DC Comics’ graphic novel, is often asked about the show’s connection to recent events. “Watchmen” aired in November 2019, about six months before the police killing of George Floyd and the social unrest that followed.

“Immediately post-‘Watchmen,’ there was a lot of discussion of the show feeling prescient,” he says. “We didn’t have a crystal ball. We had history books, and if you read history books, you’ll start to see that history has a way of repeating itself in this country, particularly when it comes to issues of racism and social injustice and police violence.”

Jefferson explored those themes as a sociology major at William & Mary, although he didn’t know then that he would draw on his education in quite this way. As a biracial youth who grew up in a mostly white, upper-middle-class suburb of Tucson, Arizona, after living in Saudi Arabia and Greece, Jefferson looked to sociology to help make sense of the world around him. Through his classes, he delved into topics of women’s history, immigration, criminal justice and the politics of being Black in America.

MASKED PROTECTORS: In “Watchmen,” police officers wear masks to conceal their identities from domestic terrorists. Jefferson and other writers working on the HBO show did not know that masks would become so prevalent during the COVID-19 pandemic.

“It forced me to start thinking about these very serious things in a way that I hadn’t been forced to when I was growing up,” he says. “I credit those classes with shaping the way that I think about the world in a very real way, and I appreciate that.”

Jefferson came to William & Mary through a family connection — his father, Wilson C. “Jeff ” Jefferson Jr. J.D. ’72, was the second Black graduate of W&M Law School, and the university’s chapter of the Black American Law Students Association is named for him. Cord recalls visiting the campus as a child and hearing glowing reports about the university from his father over the years. He’s the first to admit he was not a stellar student.

“Being interviewed for this magazine is a little funny to me because I largely remember William & Mary as a time in which I was getting in fights and cutting class,” he says. Laughing, he adds, “I feel some sense of vindication that we’re having this conversation right now.”

In “Watchmen,” a central character is Will Reeves, who as a child survives the 1921 race massacre in Tulsa, Oklahoma, a real event that Jefferson calls “the original sin of our show.” Reeves’ parents are killed, along with hundreds of others in an attack by a white mob. Episode 6, for which Jefferson won his Emmy along with show creator Damon Lindelof, reveals how that trauma spills over into subsequent generations. The massacre, combined with the racism and injustice Reeves experiences as an adult, leads him to become the superhero Hooded Justice.

Jefferson acknowledged his own challenges when he thanked his therapist during his Emmy acceptance speech. Through counseling, he recognized that he struggles with anxiety and depression, something he attributes in part to intergenerational trauma and his reaction to injustices he saw happening in America and around the world.

In terms of his own inherited trauma, Jefferson says that he never met his maternal grandparents, who were white, because they disowned his mother for marrying a Black man.

“For a long time, I didn’t really have the vocabulary to understand that,” he says. “When I was at William & Mary, the most I could have said was that I felt stressed out or gloomy. Finally meeting a therapist that I felt comfortable and safe with has been huge from my mental health, and I think huge for my creative life, too.” 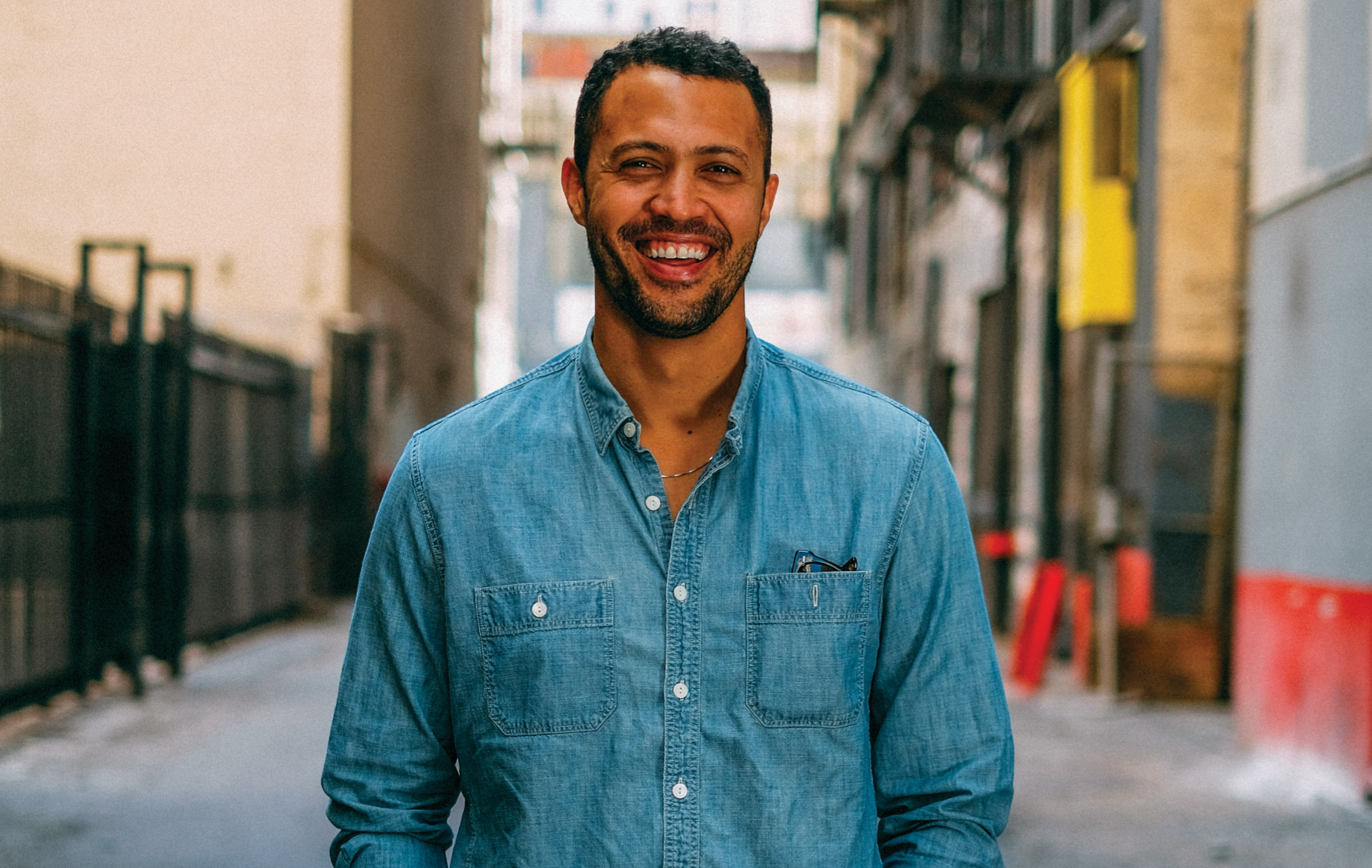 Jefferson’s father, a Vietnam War veteran, returned from the battlefield with emotional scars that affected his family relationships.

Jefferson’s parents divorced when he was 14 and his mother, Susan Haas, died in 2016 after battling cancer. His father lives in Saudi Arabia, but the two remain close despite the distance. In 2008, he donated a kidney to his father, who had been on dialysis because of kidney failure.

After graduating from William & Mary, Jefferson moved to Los Angeles, where he took a job as a communications director at a small nonprofit and started doing freelance writing on the side for newspapers and magazines.

“I always assumed that eventually I would have to go to graduate school and get a real job one day, and writing would be a hobby of mine that I would just have to do on nights and weekends for the rest of my life,” he says.

After a while, he realized he could make as much money doing freelance writing as he did at his day job, so he decided to focus his efforts on what he enjoyed most.

“I started out doing music journalism in L.A. and then I moved to New York — and then the bottom dropped out of the industry there and so I moved to D.C.,” he says.

In Washington, he covered the White House as a political reporter for The Root, an online magazine focused on Black culture. After moving back to Los Angeles, he got a big break during the summer of 2013 when MSNBC’s “All In” host, Chris Hayes, noticed a sardonic column that Jefferson had written as West Coast editor of Gawker and invited him to appear on the show. Headlined “Video of Violent, Rioting Surfers Shows White Culture of Lawlessness,” Jefferson’s piece lampooned the tendency of some media reports to hold an entire racial group responsible for the actions of those who share the same skin color.

“Toward the end of my journalism career, I was doing a lot of essay work,” he says. “I was also writing a lot about the intersection of race and politics in America.”

His appearance on “All In” caught the attention of Mike O’Malley, an actor, writer and producer who looked up more of Jefferson’s work, then hired him as a writer for the show “Survivor’s Remorse” about a low-income Black family from Boston moving to an upscale neighborhood outside Atlanta. From there, Jefferson went on to write for “The Nightly Show with Larry Wilmore,” “Master of None” and “The Good Place.”

One thing his disparate projects have in common, Jefferson says, is “they’re all ambitious in their own way.”

“I think that ‘The Good Place,’ for instance, is trying something new in the world of sitcoms,” he says. “If you would have told me 20 years ago that you’re going to be having philosophical discussions on an NBC sitcom about mortality and life after death and what it means to be a good person, I would have said, ‘Of course not. That’ll never work.’”

Not long after winning his Emmy, Jefferson signed a four-year deal with Warner Brothers Television to create and produce programs for HBO, HBO Max and other platforms.

“I’m taking two TV shows I created and trying to sell them to buyers and hopefully get them on their feet somewhere,” he says. “One is about journalism and one is about politics and media.”

In an effort to help others get a foot in the entertainment industry door, Jefferson has partnered with the Writers Guild Foundation to create a fellowship named in honor of his mother, a longtime educator, for freelance or unemployed journalists who are interested in TV writing.

“I want to give that opportunity to people as much as possible, because I think that the work is better when you have diverse voices,” he says. Being awarded for the first time this year, the fellowship attracted 700 applicants for two spots.

Looking farther ahead, Jefferson hopes to emulate his literary heroes, Joan Didion and James Baldwin, in the scope of his writing.

“They would write a book of essays, then a screenplay or a novel, and then they would go follow a political candidate and write a piece of journalism for a magazine or newspaper,” he says. “I want to write as much as possible in as many mediums and genres as possible. That, to me, is what keeps things interesting.”