Along with peers across the country, Anna Laws ’18 helped launch The FarmLink Project, a nonprofit that transports surplus produce from farms to food banks in need while restoring the jobs of farmers and truckers.

According to Feeding America, more than 50 million Americans may face food insecurity due to the COVID-19 pandemic. At the same time, farmers been unable to sell millions of pounds of food to restaurants and food service. Since the end of April, FarmLink has transported over four million pounds of produce and received national media publicity from The New York Times, Fox News, ABC, Washington Post and more.

Laws shared her story with the W&M Alumni Magazine this September.

What is The FarmLink Project?

When the pandemic started, the food service and restaurant industries were struggling, so farmers had less options for selling their produce. At the same time, food banks were experiencing a staggering surge in demand. The link connecting farms and food banks was missing, so in April, the FarmLink project was born.

We're a grassroots movement working to prevent food waste while addressing food insecurity. We raise money to pay farmers for produce and dairy that would otherwise be wasted or destroyed, and we fund the transportation to send the goods to food banks.

Farmers are very busy people. Even if they get a tax deduction for donating produce, it’s a big ask for them to pay for a truck to ship it somewhere. Food banks don't always have the resources to pick it up, either. We provide that connection. We're constantly researching to find farms, food banks and community organizations that can help — cold-calling, Googling, sourcing from people we know and their networks. We have our work cut out for us and I don't see it ending anytime soon, even after the pandemic is over.

We have about 200 people working for no pay to make this happen because we love it, even if the issue of food waste wasn’t something we were familiar with previously. It's mostly young people and such an inspiring group to work with.

We have moved the equivalent of 10 million meals of produce and dairy, just since April. But there's still a need. Because of the ways news cycles work, there's less awareness now that food bank lines are still growing. Even as people return to work, the economic impact of being furloughed for months can be huge.

How did your William & Mary education prepare you for the work you are doing now? 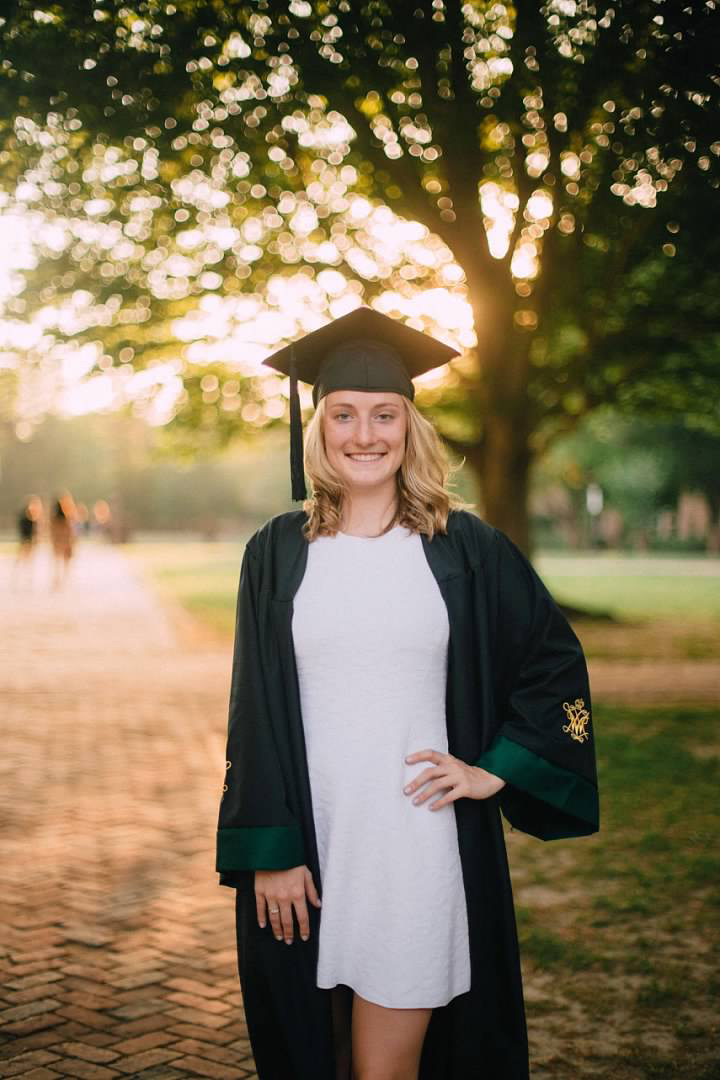 My William & Mary education helped me realize I wanted to go into service. I went in freshman year as a biology major for pre-nursing, but I took a kinesiology class that introduced me to public health and international development. On day one of the class, I knew I’d found my passion and I changed my major. I went up to the professor, Camilla Buchanan, after class and asked her about her career and her experiences in public health. I went back to her as a mentor for so many different things during my time at W&M. Being able to connect with faculty like that is what’s special about William & Mary.

I wanted to do an independent study on the ethics of sustainable service. There was a professor, Alison Scott, doing this kind of research. I said, “I read about your work and I'd love to do this research project with you,” and she immediately said “Yes, let’s do it!”

Why did you decide to attend William & Mary?

I'm from Northern Virginia and my mom, Tracey Wright Laws ’85, went there, so I grew up a little biased about living in Williamsburg, eating Cheese Shop sandwiches and loving the Tribe. The more places I looked, the more I kept coming back to William & Mary as having everything I wanted in my college experience. It was a mid-sized liberal arts institution, but there was something extra about the way I felt walking around campus. I could actually see myself there. There wasn't just one type of person that went to William & Mary. People were involved in things all over campus to create a really cool interconnected community. It was extremely humbling to see all these great people doing all these great things, but I still felt I could bring something of value to the community. I didn't come close to feeling that anywhere else.

How did you get involved in FarmLink?

Professor Buchanan has a nonprofit called MAO Kenya. She takes a few students to Kenya with her over the summer to work at an elementary school teaching sexual health education. That was a defining experience that made me want to join the Peace Corps. I got so much out of the experience in Kenya that one summer was not enough.

I joined the Peace Corps right after graduation and served as a community health volunteer in Peru. I worked on a health and nutrition education program, since there's a high rate of anemia in children under 5 in Peru. I was only there for 7 months out of 27 because we got evacuated in March.

I found myself at home with free time to fill and the urge to make a positive impact to alleviate some of the ramifications of the COVID-19 crisis. I was working at a food bank outside Charlottesville, Virginia, and heard about the work FarmLink was doing.

When I joined, there were about 20 of us, but we got to 200 by the end of the summer by calling friends and asking them if they wanted to help. It grew a lot faster than we expected. My first job at FarmLink was cold-calling food banks. Now, when I call, they have heard about us.

What’s next for you?

I'm not sure what the future looks like. Peru and Brazil were hit the hardest by the pandemic in South America. I had a fantastic experience with the Peace Corps in Peru, but it might be a few years before they are ready to accept volunteers again.

We are in the beginning stages of Farmlink and I’m excited to see what it will become. The best kind of service is when you’re trying to work yourself out of a job — but even when supply chains return to normal there’s still going to be food waste, and even when the job market returns to normal there will still be people needing food assistance. The goal is to create sustainable pipelines between farms and food banks and community organizations so they can continue even without an organization like Farmlink. This experience has really inspired me to learn more about food systems and I'm looking at graduate programs.

What’s next for FarmLink?

When we started, we had no database of farms or food banks. Now we can match deliveries to the size of the foodbank and the size of the farm, and keep things local — trucking within 200 miles.

As our volunteers are returning to school or work, we are looking for ways to make what we do more automated. Farmers could go onto our website to say what they have and could be automatically matched with a food bank who wants it. We’d like to keep helping with grant writing and tax deductions, too. When it’s so easy to send the food to someone who could use it, it benefits everybody.

At first, we were trying to move as much food as possible — large shipments of potatoes and onions, for example. Then, once we had some breathing room, we started asking how we could get more nutritious food to food banks — kale, spinach, tomatoes. Logistically, it’s a lot harder. You have to ensure proper refrigeration and that you can move it fast enough.

Now we are looking at how we support small family farms, minority-owned farms, people in marginalized groups and independent food banks — farms and food banks that might not be receiving subsidies from the government or help from larger organizations. 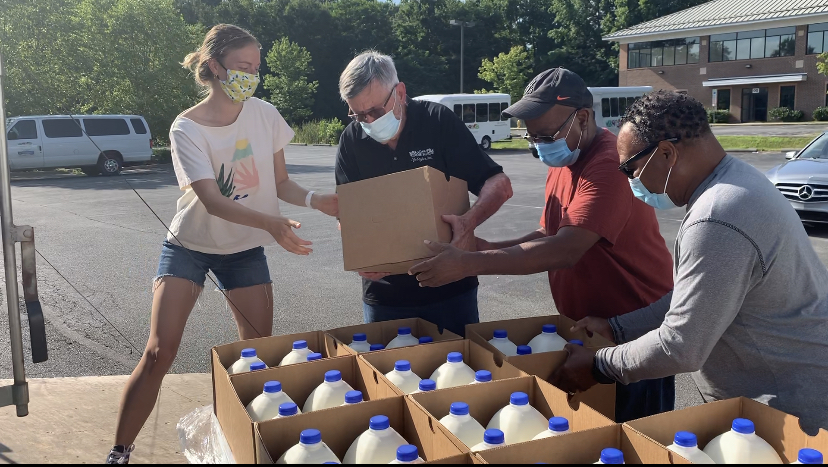 A lot of it is just connecting with people. I went to help unload a huge shipment of milk and I met a woman who was coming to pick up milk for 20 families in the Piscataway tribe in Maryland. Then we heard about a farm who had one truckload of cucumbers. We were trying to figure out what to do with them, and so I called her and she could take them. Now there's a relationship between this small farm and this tribe to handle the surplus. It's personal and high impact.

I hope to be joined by more members of the Tribe in the future. Donations are always appreciated, and every dollar donated goes toward purchasing produce and paying for it to be transported to those who need it. That being said, one of my favorite things about FarmLink is how much involvement volunteers can have outside of donating. It can be something as simple as going on our website, where you can input information about farms or foodbanks in your area to help us grow our network. But if you have more time and want to get your hands dirty, we host Zoom calls where anyone can sign up to help with cold-calling farmers and food banks. On our Facebook page, we let you know were deliveries are happening all over the country, so volunteers can go to the food banks to help unload the trucks and organize the produce and dairy or help distribution to the members of the community. We also encourage people to just volunteer at their local food bank. They need help right now.