On the morning of September 11, 2001, Jennifer Joyce ’11 was sitting in a middle school classroom in Chesterfield County, Virginia, unaware of the world-shattering events taking place in New York City, Shanksville, Pennsylvania, and Washington, D.C.

When she got out of class, she heard fellow students in the hallway talking about a plane hitting the World Trade Center. But it wasn’t until she got home and saw the look on her mother’s face that she grasped the enormity of the situation.

“It took me a little while to process it,” says Joyce, manager of interpretive programs at the National September 11 Memorial & Museum in New York City. “About a week later, I remember thinking, ‘I wonder how we’ll learn about this in 20 years?’ And now, here I am.”

Trained as a public historian, Joyce works with a team of docents and tour guides who interact directly with visitors, relating the events of 9/11 and providing broader historical context. Approximately 70 million people have visited the site since it opened a decade ago.

“People come here from all over the world,” Joyce says. “You’ll hear 9/11 stories from anyone who was old enough — it doesn’t matter where they were. So the universal nature of the event is compelling and powerful.”

Located at ground zero in lower Manhattan, the 9/11 Memorial & Museum honors the 2,977 people who lost their lives on Sept. 11, 2001 — including 441 first responders — as well as the six people killed in the 1993 World Trade Center bombing. Their names are inscribed around two outdoor reflecting pools formed in the footprints of the twin towers.

As Joyce explains, the 110,000-square-foot indoor museum is built into bedrock so that the original steel column bases and concrete footings of the World Trade Center can be on public display. Along with a concrete slurry wall built to keep out Hudson River floodwaters and a portion of staircase used by people fleeing the towers, these surviving artifacts are considered archaeological assets and are federally protected.

Within the museum, Joyce finds the 36-foot-high “Last Column” to be among the most moving of the artifacts displayed. Its removal from ground zero on May 30, 2002, marked the end of the rescue and recovery effort.

“It’s covered with tributes and mementos that the recovery workers left there,” she explains. “It was a memorial that people made because they needed one. For me, it’s a reminder of how many people stepped up afterwards. There were thousands of recovery workers, and even more people supporting them, making sure they were getting fed and cared for.”

The huge steel column symbolizes a major theme that Joyce and her colleagues emphasize to visitors: the compassion and courage displayed by ordinary people in the face of terror.

“There’s a story I used to tell on my tours about two men, Pablo Ortiz and Frank De Martini, who died on 9/11,” she says. “Before the towers collapsed, instead of leaving the building, they decided to do a sweep of the floor they were on. They broke through jammed doors, and they managed to get an elevator open where people were trapped.” The two men and several of their co-workers saved nearly 50 lives.

“There are so many stories like that, and I think those are perhaps the most important because they’re actionable,” Joyce says.“It’s harder to put myself in the mindset of one of the police officers or firefighters who rushed in that day — but someone who just went to work to sit at their computer, that’s a much easier connection to make. What would I do in that situation?”

Growing up in an area steeped in Civil War history, Joyce says, “I’ve always been attracted to more difficult history, history that people are still arguing about.”

She found William & Mary to be a perfect fit for pursuing a career in the field. “I originally thought I was going to get a Ph.D. and teach history — I was never going to leave the ivory tower.” Then, in her senior year, she took a course in public history with Susan Kern Ph.D. ’05, executive director of the Historic Campus.

As part of her coursework, she interned in Colonial Williamsburg’s film department, helping to develop CW’s electronic field trips for schoolchildren. She also witnessed visitors engaged in misguided arguments with interpreters playing the roles of the nation’s founders, like Thomas Jefferson.

Joyce realized she wanted to reach people more directly as a historian. “It was a twofold realization: one, that people were misunderstanding history, and that made me very angry. And two, if you wanted to counteract that, the way to do it was probably not in an academic paper, although that’s certainly important. For me, it seemed more effective to go where the general public is.”

After graduating from William & Mary, Joyce went on to earn a master’s degree in public history at New York University. Finding herself in the right place at the right time, Joyce was offered a position at the 9/11 Memorial & Museum in 2013 and began working at the museum portion of the site when it opened in 2014.

Among her proudest achievements is developing training for interpreters on how to deal with difficult visitor interactions, which had become more frequent around the time of the 2016 election.

Joyce challenged the interpreters to examine their own preconceptions in order to become more effective educators. “This is something that we talked about in training. What is the difference between genuine ignorance and aggravation or malice? What can we do to make sure that we’re not contributing to this interaction?”

The curriculum Joyce developed is now an integral part of interpreter training. “I’m pleased to say it’s been very successful.”

In her current position, Joyce manages all of the volunteer docents, who are stationed at positions around the site to provide further detail to visitors, complementing the work of the tour guides. Many of the docents are 9/11 stakeholders, who had direct experience of the event.

Understandably, there are other stakeholders who have been reluctant to visit the site. “For some, they don’t want to go back because it was so traumatic. For others, there was a very real fear that the museum would not do the story justice,” Joyce says.

“So it’s always very special when someone tells me, ‘I wasn’t ready before, but I’m here now. I’m so glad that I came.’”

Joyce vividly recalls one particular interaction with a stakeholder. “I had just wrapped up a tour and was answering questions. One of the gentlemen on my tour, who hadn’t spoken previously, said, ‘I was here at the twin towers.’ And he told me his story,” Joyce says.

“Once he got out of the towers, the man starting walking north toward his home outside the city. By the time he got to Harlem, his shoes were falling apart. A stranger stopped him on the street, took off his shoes and gave them to him. And then this man called a friend who had a car and said, ‘We’re going to get you where you need to go.’

“It was an amazing moment.”

Being immersed in the retelling of the 9/11 story on a day-to-day basis is not an easy undertaking. “Focusing on the facts, the concrete information, can help,” Joyce says. “But it sneaks up on you when you don’t expect it — for example, when someone on your tour looks emotional. We spend a lot of time as an institution talking about self-care and the importance of stepping back from time to time.

“And then of course there’s the mission — that feeling that you’re doing something important in honoring these lives and telling these stories,” she says. “It’s been a privilege to interact with the men and women who were part of the event, and those who weren’t and who want to learn about what happened here.” 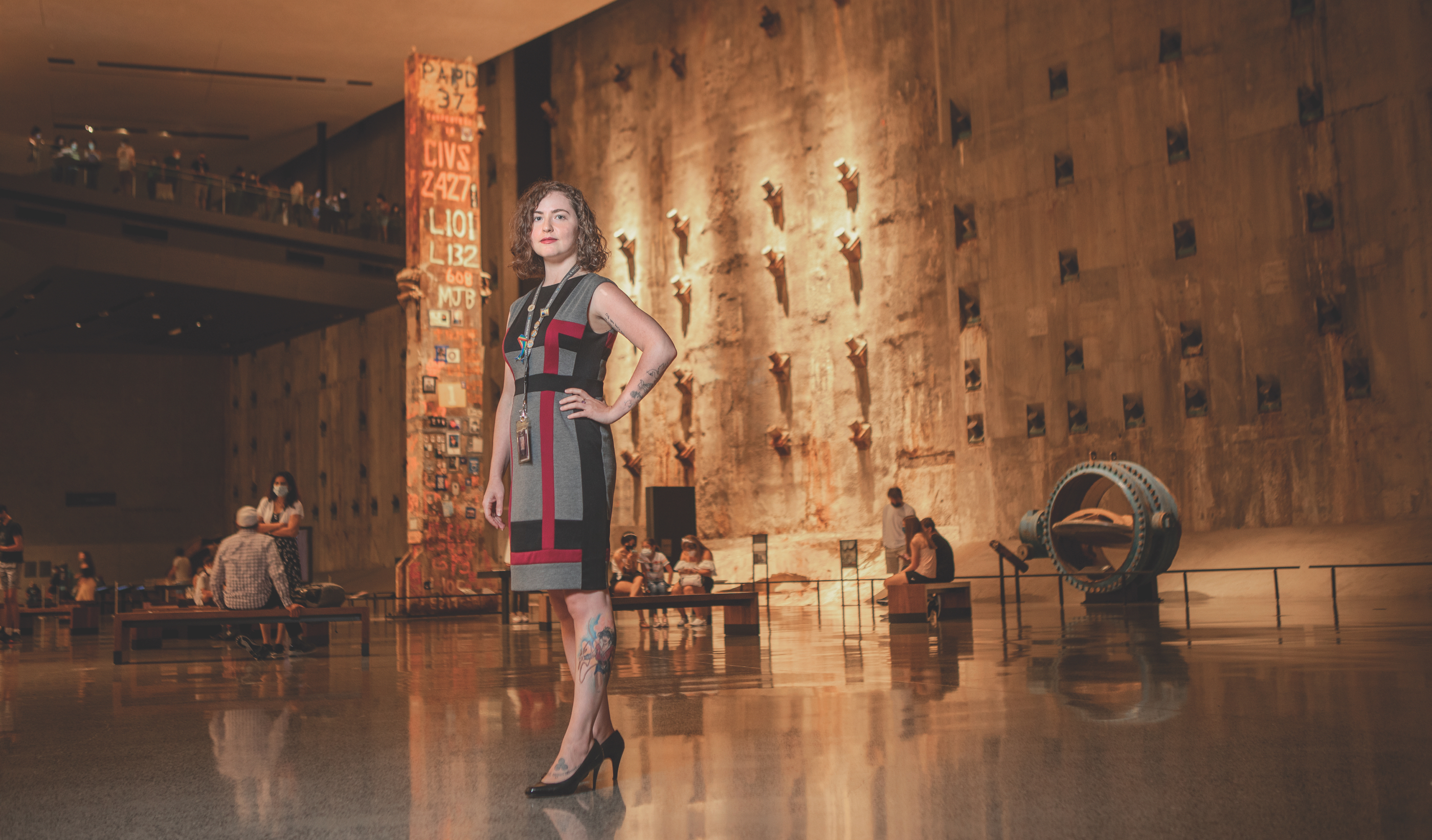 In her work at the 9/11 Memorial & Museum, Jennifer Joyce ’11 always finds it particularly rewarding when she encounters fellow members of the Tribe.

When the site turned to virtual programming during the COVID-19 pandemic, Joyce saw an opportunity to continue engaging alumni. She reached out to the W&M Alumni Association, which sponsored two virtual tours this past fall.

Joyce led the Memorial Plaza tour. “William & Mary is where I discovered public history, and to be able to come full circle and present to alumni was really special,” she says.

The greatest honor for Joyce was being invited to speak a few words about the seven W&M alumni who perished on 9/11. Their names are inscribed at the memorial in permanent remembrance: