The Christopher Wren Association has a new name — the Osher Lifelong Learning Institute at William & Mary. The name was introduced in July 2018 as part of a grant from the Bernard Osher Foundation, which supports lifelong learning centers at 123 institutions of higher learning nationwide.

Though the name has changed, the mission remains the same: to provide learning and enrichment for the community.

“To learn is to grow, and Osher classes offer learning opportunities and intellectual stimulation. Our classes attract people with similar interests and serve as a catalyst for the formation of new relationships,” says John Anderson, current president of the Osher Institute at W&M.

This year, 1,100 members registered to take up to eight of the 162 spring 2019 semester courses. Classes this summer ranged from “Charles Lindbergh: The Man, The Myth, The Mystery” to “Mastering your iPhone/iPad Camera and Photo Applications” and from “ISIS and the Explosive Middle East” to “Discover Painting with Soft Pastels.”

Classes are taught by volunteers in the Williamsburg community, approximately 15% of whom are alumni or former faculty and staff.

While the courses are geared toward those over 50, you do not need to be a particular age to join. Though about 7% of participants are alumni, classes are open to all. They are offered on campus, at William & Mary's Discovery I building, the School of Education building, and at Thomas Nelson Community College, Williamsburg Regional Library and several residential locations in the community.

The grant from the Bernard Osher Foundation has enabled the Osher Institute at W&M to upgrade the audio-visual system in Kaplan Arena’s Wightman Cup Room, one of the classrooms where they frequently hold sessions. The institute also purchased portable AV equipment to increase the number of usable spaces for classes.

The grant also enabled the institute to offer a scholarship so more members of the Williamsburg community can participate in class offerings, and it funded a marketing study to recommend strategies for increasing and retaining membership. The study will be conducted in collaboration with the Raymond A. Mason School of Business Corporate Field Consultancy Program, which allows MBA students the opportunity to consult on real-world business problems.

Additionally, the grant expanded Osher at W&M’s popular “Town & Gown” series for this past Spring semester, which highlights key initiatives in Williamsburg and at William & Mary and provides access for Osher members to city and university leaders. This fall the institute hosted a reception with President Katherine Rowe for members as part of this series.

To fulfill the terms of the grant, Osher at W&M is now managed by William & Mary’s Office of Auxiliary Services. It was previously part of the William & Mary Alumni Association. The institute will continue to manage its own funds, staff and programming.

“Now, as a full-fledged unit of William & Mary, we have many opportunities to benefit and to contribute,” says Anderson. “We look forward to taking advantage of those opportunities, such as working with W&M business students and their professors to develop our marketing plan, and having students and faculty offer lectures on their research to Osher members. It is a win-win arrangement.”

Osher at W&M is eligible to apply for an additional $1 million grant in early 2020, which would create an endowment to provide funding in perpetuity.

Osher at W&M has grown considerably since it first began at William & Mary in 1991, with just 16 courses offered and 109 students.

The Christopher Wren Association (CWA), as it was called then, was the brainchild of the late Ruth Lynch Kernodle HON ’08 and Wayne Kernodle HON ’08. Both were retired sociology professors, Ruth from Christopher Newport University and Wayne from William & Mary, and they wanted to continue teaching and learning.

After conducting extensive research on other university's programs, the Kernodles created a framework for a program in Williamsburg. In 1990, they pitched their idea for a volunteer-run lifelong learning association to William & Mary’s president, Paul Verkuil. He agreed that W&M would sponsor the independent organization, and CWA was born – named after the iconic Christopher Wren building and in honor of Christopher Wren’s career as an educator as well as an architect.

Carl Brown first met the Kernodles in 1991 when he and his wife Judith signed up for a class in the CWA’s second semester. They became fast friends.

“They were wonderful people and we were very close,” says Brown. “Ruth was the dynamo of the two – we lovingly called her the bulldog! It didn’t take much to motivate Ruth. She made things happen and was very much involved in the decision-making and planning.”

Ruth was the first director of CWA and Wayne served on the board. Ruth asked Brown to lead the committee on college relations, which he did for three years before becoming the board’s chair.

The classes grew quickly through word of mouth, and Brown and the Kernodles found space in academic buildings, local businesses, housing communities and churches. Both Ruth and Wayne taught classes on sociology topics occasionally, and stayed very involved behind the scenes for more than a decade, continuing to be fierce advocates of the program. In 2008, they were made honorary alumni by the W&M Alumni Association in honor of their contributions to “an important means of outreach and interaction with the College and the community …  which has grown into one of the largest lifelong learning organizations in the nation.” 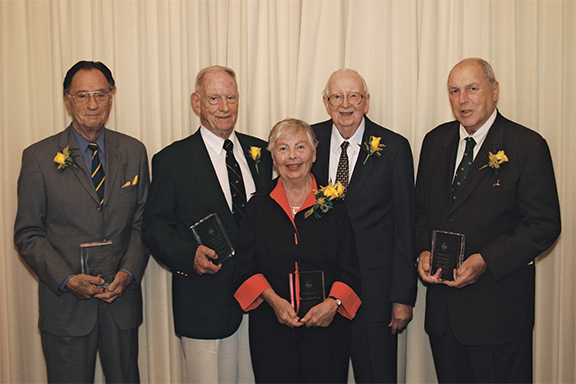 Ruth and Wayne Kernodle (center) at the 2008 Honorary Alumni ceremony.

Wayne passed away in March 2017 at age 100, and Ruth passed in this January at age 97. They saw their beloved program turn 25 years old and increase in size ten-fold.

Brown still attends CWA classes, and he misses the Kernodles dearly. “We grew old together. Wayne was a mentor and we shared every birthday, every big life happiness and sorrow together.”

The Osher Institute at W&M now has two full-time staff members, Director Scherry Barra and Administrative Coordinator Carrie Lehman, and three part-time staff. The instructors, the board of directors and committees, class hosts, class assistants and office support are all volunteers.

As they look toward the future, Anderson and Barra hope to expand the membership and course offerings of Osher at W&M, including developing, evaluating and implementing a variety of course formats and delivery methods. They are working with other Osher Institutes to research online programming options, which could aid members with limited access to transportation and alleviate some space restrictions. The move to online registration in 2016 proved successful, as now more than 85% of students register online each semester – a hopeful sign for future online offerings.

They are also looking to recruit more volunteer instructors, board and committee members and classroom assistants.

“We hope to further engage current W&M faculty and students to offer courses for our community members. We have had several courses given by W&M graduate students and our membership really enjoys these connections with the students at W&M,” says Barra.

They also would like to increase the scholarships offered, as many seniors in the community are on fixed incomes.

“In short, the Osher Institute for Lifelong Learning at William & Mary invites people to keep learning, and to be looking to the future as well as reflecting on the past,” says Anderson. “And, we provide the necessary tools and opportunities for doing it together with others. That is why, inspired and initiated by Ruth and Wayne Kernodle, we call ourselves an institute for lifelong learning.”