This post originally appeared on You Belong: The Young Guarde Blog.

William & Mary and Rutgers are the only two of the nine “Colonial colleges” founded in British North America before the American Revolution to eschew the Ivy League and instead take on the roles of state universities. As a William & Mary alumnus working for the State Park Service of New Jersey, I enjoy a special place connecting and sharing the long histories of both Colonial colleges turned public universities.

Greetings from the Garden State. I’m Paul Soltis ’16 from Lawrence Township, New Jersey, more famously the hometown of my William & Mary predecessor Jon Stewart ’84. I grew up with an interest in the American Revolution, and even more important, our public stewardship of state parks and historic sites in this corridor of the “Crossroads of the American Revolution” that includes Washington Crossing State Park, Trenton Battle Monument and Princeton Battlefield State Park. For me, it’s not Fourth of July fireworks or autumn leaves on battlefields but the shorter days, longer nights and colder temperatures of the festive season that evoke the Revolutionary War. In New Jersey, we remember the “Ten Crucial Days” when George Washington (holder of a surveyor’s license from William & Mary and the college’s first American Chancellor, even if not a full alumnus) and a small but diverse band of soldiers and camp followers crossed the Delaware River on Christmas night and engaged British forces including Hessians and Highlanders at Trenton and Princeton from Dec. 26, 1776, to Jan. 3, 1777. 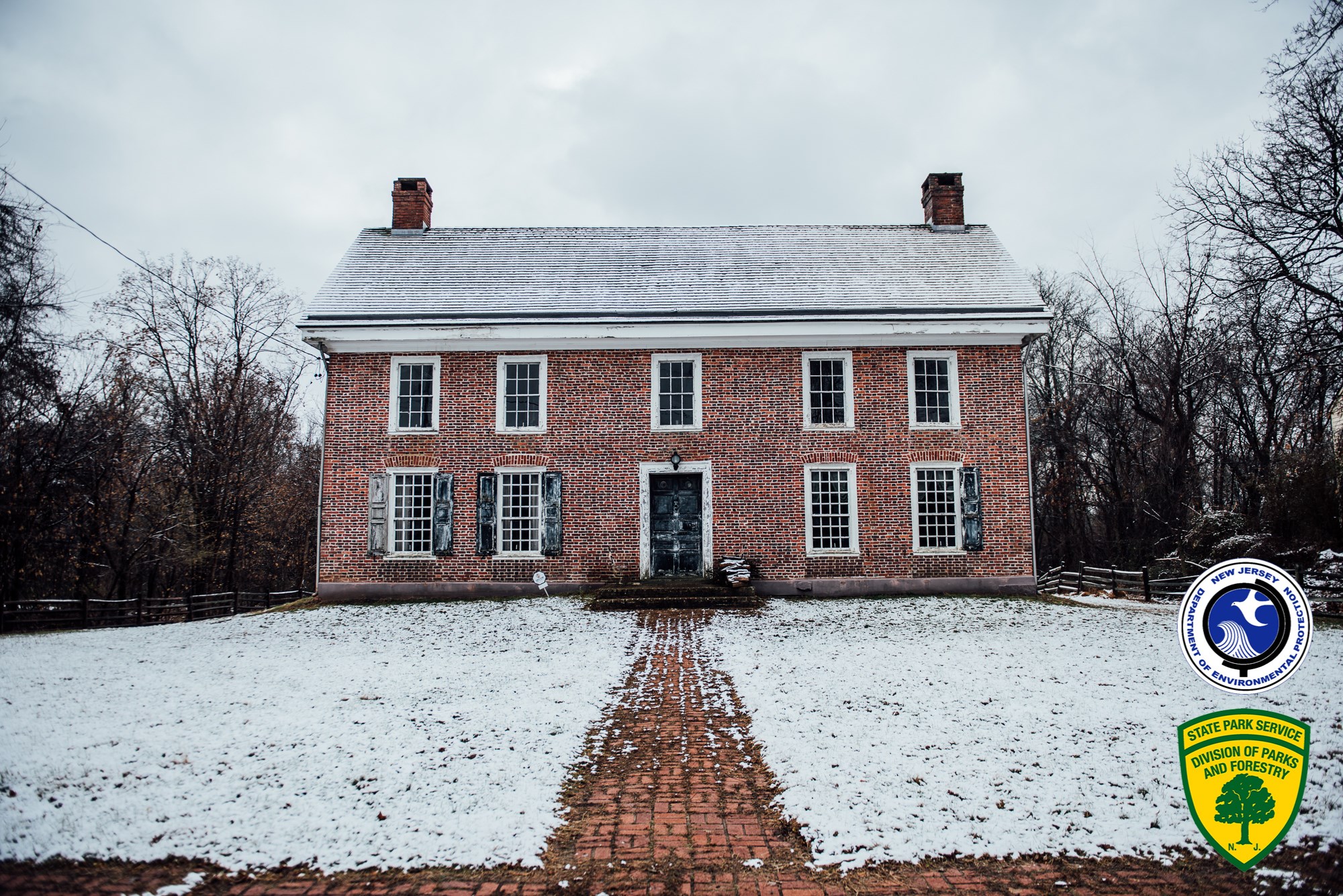 I work for the State Park Service of New Jersey as historian for Wallace House & Old Dutch Parsonage State Historic Sites. Wallace House served as George Washington’s winter headquarters during the Revolutionary War’s 1778-79 Middlebrook Cantonment. Old Dutch Parsonage is the historic home of the founder and first president of Queen’s College — today Rutgers, The State University of New Jersey. At William & Mary, I worked in the Spotswood Society as a proctor of the Wren Building and in Campus Recreation as a patron services assistant for the Student Recreation Center. Serving students, faculty, staff and guests at these two facilities at opposite ends of our campus and centuries apart in our history, I valued this unique perspective on the whole stretch of our university life. Now, as historian for 18th-century historic houses that today belong to New Jersey’s State Parks, Forests & Historic Sites as part of our Department of Environmental Protection, I enjoy working again in public service where the diverse needs of natural and historic resources come together for the benefit of the people of New Jersey.

The first of New Jersey’s “Colonial colleges” was the College of New Jersey, today Princeton University. They proposed to name their college building in honor of the Royal Governor of New Jersey, Jonathan Belcher. Gov. Belcher turned down the honor, fearing the jokes generations of students would make with “Belcher Hall” at the heart of campus — OK, no, that’s my attempt at a joke — but Gov. Belcher did turn down the honor, wishing instead to honor a figure of the recent past, the late King William III of our William & Mary. The College of New Jersey christened their new building Nassau Hall in reference to William III’s Dutch titles Prince of Orange and Count of Nassau, and generations later Princeton University kept the allusion going with the adoption of orange and black as its signature colors. Meanwhile, according to Swem Library’s Special Collections Research Center, William & Mary tried out orange and black for the same reason, as well as orange and white to include the white rose of York for Queen Mary II, but eventually settled on green and gold after the rediscovery of William & Mary’s Coat of Arms.

Unlike Virginia, where the Church of England was established in the Colonial era and as such the government sponsored an Anglican college at William & Mary, 18th-century New Jersey had no established church, allowing for the proliferation of a variety of religious traditions, at least among dissenting Protestant denominations. Rev. Jacob Rutsen Hardenbergh, in residence at today’s Old Dutch Parsonage, led the effort to charter a second college in New Jersey for the specific purpose of educating in the Dutch Reformed tradition. The Royal Governor, by then William Franklin, son of Benjamin Franklin (first recipient of an honorary degree from William & Mary), granted a charter for Queen’s College on Nov. 10, 1766, making New Jersey the only colony of British North America to host more than one college before the American Revolution.

Women’s education came to the Colonial colleges at William & Mary and Rutgers in the momentous fall of 1918, the same season when the Armistice took effect on the Western Front in World War I and the influenza pandemic called the “Spanish Flu” gripped the globe’s public health. That semester, women enrolled at William & Mary for the first time, while the College for Women opened in New Jersey as a sister to Rutgers College. Actor and activist Paul Robeson began his senior year at Rutgers College, and both the College for Women and William & Mary saw campus closures to stop the spread of Spanish Flu. I was surprised to learn that the first students at the College for Women, later renamed Douglass College for their founder and first dean Mabel Smith Douglass, arranged a Yule Log as a festive conclusion to their first semester in 1918, a decade and a half before William & Mary adopted a similar tradition in the 1930s. Like our Yule Log, the College for Women’s Yule Log has grown over the years to include a variety of faith traditions and diverse perspectives, and it remains a cherished tradition of the modern Douglass Residential College, today a residential program of Rutgers, The State University of New Jersey.

Drawing from these traditions, I’ve adopted a “Colonial Colleges” Yule Log as a seasonal fixture for our historical interpretation at Old Dutch Parsonage State Historic Site, sharing the long histories of these two Colonial colleges turned public universities with our New Jersey audiences, adding one more flame to the festive fires rising this time of year from Douglass Residential College at Rutgers, the shores of the Delaware River at Washington Crossing State Park, and the Great Hall at William & Mary. 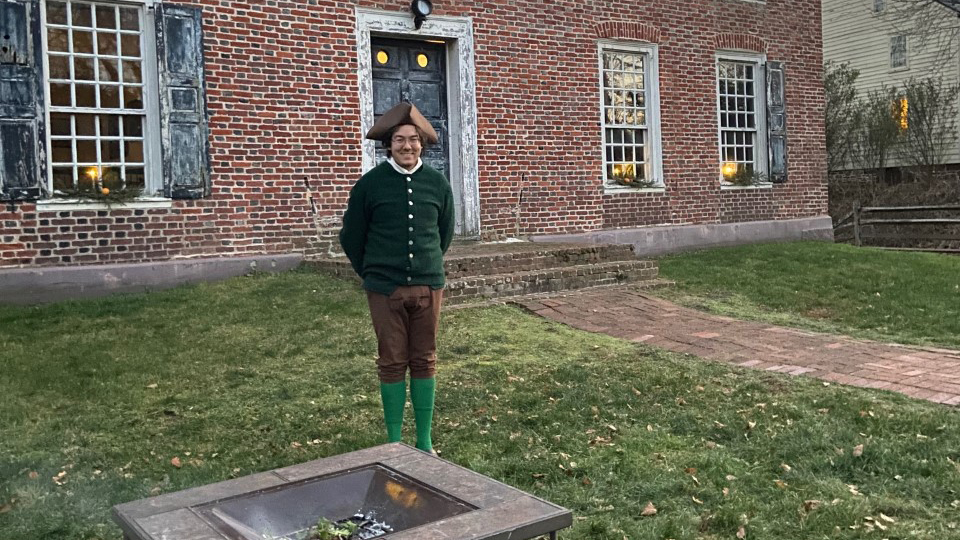