How do you define the color red?

That question — seemingly simple but endlessly complex — has fascinated William & Mary chemistry professor Kristin Wustholz since she first heard it posed in an undergraduate philosophy class. A double major in philosophy and chemistry, she was studying the work of Maurice Merleau-Ponty, a French phenomenologist, and the role of expression in science and art.

Wustholz’s fascination with color has led to a unique collaboration marrying 21st-century laser microscopy with centuries-old art. Since her arrival at William & Mary five years ago, she and the students in her lab have worked with painting conservator Shelley Svoboda at the Colonial Williamsburg Foundation (CWF) to detect fugitive pigments in historic oil paintings — with major implications for the field of art conservation.

As a postdoctoral fellow at Northwestern, Wustholz had mastered a relatively new laser microscopy technique called surface-enhanced Raman spectroscopy (SERS). With SERS, scientists can detect vibrational spectra unique to the chromophore — the part of a molecule that creates color — in paints and dyes.

“One of my colleagues was working with the Art Institute of Chicago,” Wustholz says. “I wrote a paper together with them that made me realize you can do really great science on something that has a very real-world context, something that people can see and appreciate.

“Once I had the job offer at William & Mary, I knew I wanted to work with an actual collaborator,” Wustholz continues. She got Svoboda’s name through a W&M undergraduate student, and the two hit it off immediately.

The collaborators set out on groundbreaking research — the first application of SERS to the study of organic pigments in oil paintings. Appropriately, they started with the color red.

As the initial focus of their study, Wustholz and Svoboda selected a painting newly acquired by CWF: a portrait of Colonel Isaac Barré by renowned 18th-century English artist Sir Joshua Reynolds. In the painting, Barré wears the brilliant scarlet coat of a British army officer, but the investigators were looking for a far less obvious red.

“Reynolds was known as a super experimenter,” Svoboda says. “There’s a lot of discussion in period literature about his use of carmine [a highly prized pigment derived from the cochineal insect] as a flesh tone. But the quantity of the color in this area of the painting is an extremely small part of a complex mixture of materials, so that eliminated a lot of the existing technology.”

As Svoboda explains, other paint analysis techniques require conservators to excise a relatively large sample from a painting, generally about the size of the period at the end of a sentence — often too potentially risky to remove from the facial area. SERS, however, is minimally invasive, allowing Svoboda to use a fine scalpel to remove a sample undetectable by the human eye.

Using the SERS technique, the sample is covered with a paste of silver nanoparticles that act as an antenna when placed under a laser. They provide a broadcast signal called Raman scattering, essentially a pattern of scattered light, unique to the colorant being analyzed.

Doing this novel research is really eye-opening, because it’s not cookbook manual stuff, and I’m exploring something that hasn’t been done before.

Wustholz’s students are crucial to every step of the process, from synthesizing and applying the nanoparticles to using the highly sophisticated laser equipment. Joo Yeon (Diana) Roh ’16 started off in her freshman year learning how to clean glassware, and is now teaching fellow students how to run experiments.

“Doing this novel research is really eye-opening, because it’s not cookbook manual stuff, and I’m exploring something that hasn’t been done before,” she says. Roh is part of a team developing a new teaching manual for SERS.

“There’s an aspect of craft that goes along with it,” says Mary Matecki ’16, who received a 2015 Charles Center summer fellowship for independent research in Wustholz’s lab. “Developing that instinct is what we call ‘getting your lab hands,’” she says. “The thing that’s been most notable for me is seeing how every paint sample is essentially a case study — they each have their own personalities.”

Under the SERS technique, the unique personality of carmine revealed itself in the face of Isaac Barré, and — much more surprisingly — in an early American portrait of William Nelson by artist Robert Feke, also in the CWF collection.

Svoboda, Wustholz and her students became the first in the world to develop a reproducible protocol to identify red organic pigment in the flesh tones of oil paints without sample treatment. They published their findings in the prestigious journal Analytical Chemistry, with Stephen Dinehart ’12 and Lindsay Oakley ’12 as first and second authors.

“The undergraduates in my lab are so good, they’re already acting like graduate students,” Wustholz says. “They’re the ones who eventually make the discoveries. They’re driving the science.”

After their initial success with red, the collaborators moved along the color wheel to blue.

“We started realizing that our technique for red pigments didn’t work for anything else,” Wustholz says. “At first the students were so frustrated, but I said, ‘This is good.’ It’s what you don’t know that gives your path as a chemist meaning.”

Analyzing a portrait of Virginian Evelyn Byrd, painted in London in the 1720s, the research group again broke new ground. In the painting, Byrd wears an elegant blue dress: a peek under the frame shows how much that blue had faded. Did the artist use Prussian blue, a more stable synthetic pigment developed around 1706, or pigment from the indigo plant? To their surprise, Wustholz and Svoboda found both pigments present, and in the process, were the first to identify indigo with high fidelity.

“Every time we come up with something that’s new, I scramble back to the literature to make sure it’s not there — and it’s not there,” Svoboda says.

“We can get so excited when we finally find out that we have indigo or carmine,” she continues. “But I’m part of a larger body of conservators here, and our first underlying drive is long-term preservation of the collections. It’s light exposure that primarily causes these beautiful organics to become quieter. And so we need to be aware that the collections can have these more vulnerable color bodies in them.

“What we’re doing with our findings is really putting the puzzle back together with the period recipes that tell us these dyes were used for oil paintings. It’s very complex, because the fading rates are pretty much a blank slate.”

“Going over to Shelley’s lab is always exciting,” Roh says. “The privilege of this project is that I get to witness all the steps of conservation.”

Wustholz notes that the real-world application of her research often attracts students to her lab initially — both the art collaboration and the other major focus of her lab, dye-sensitized solar cells. “They gradually realize they’re really good at scientific research, and they gain the confidence they need to be rock stars in graduate school.”

“Being in her lab, you get a sense of ownership of your project,” says Monroe Scholar Jenna Tan ’16, who received an Honors Fellowship to work on the solar cell project full time in Wustholz’s lab this past summer. “You figure out a lot of things along the way, but I found out that with research, questions beget more questions. That’s what motivates me.”

Based on their success in identifying individual reds and blues, Svoboda, Wustholz and her students have recently tackled a more complex color: green. As most beginning art students know, green is created by mixing the primary colors blue and yellow. That creates two major problems.

The first is detecting an organic yellow. “The logistics of getting a yellow organic paint sample are tremendously challenging,” Svoboda says. “Varnish is yellow, the yellow organics fade and the early cleanings were often very harsh.” Svoboda points to a 1730s painting of Mrs. William Nelson’s floral spray: what were once green leaves now appear blue, with the yellow completely faded away.

The second problem is finding individual pigments within an amalgamation of colors. “We started by determining if we could develop a stepwise methodology to identify multiple components in a single sample,” Wustholz says. “It sounds straightforward, but no one had done it. And it wasn’t straightforward.” Matecki and Roh worked full time on the project last summer, mixing their own greens in Svoboda’s lab just like the 18th-century artists whose work surrounded them.

“The students figured it all out and married everything together. We have a paper submitted that demonstrates the first identification, to my knowledge, of a yellow lake pigment in any kind of painting, period,” Wustholz says. Both Matecki and Roh are authors on the paper.

“Now we’re looking at a way of synthesizing all the different methodologies into a stepwise flowchart that someone can use in the conservation setting. I think that’s where the future of this is going,” Wustholz adds.

As always, it is the unanswered questions that drive the collaborators forward. “We’re so passionate about the paintings — I could look at them forever, and ask the questions about how they were made and what they were made with,” Svoboda says. “They’re an endlessly rich product of humanity’s creation.” 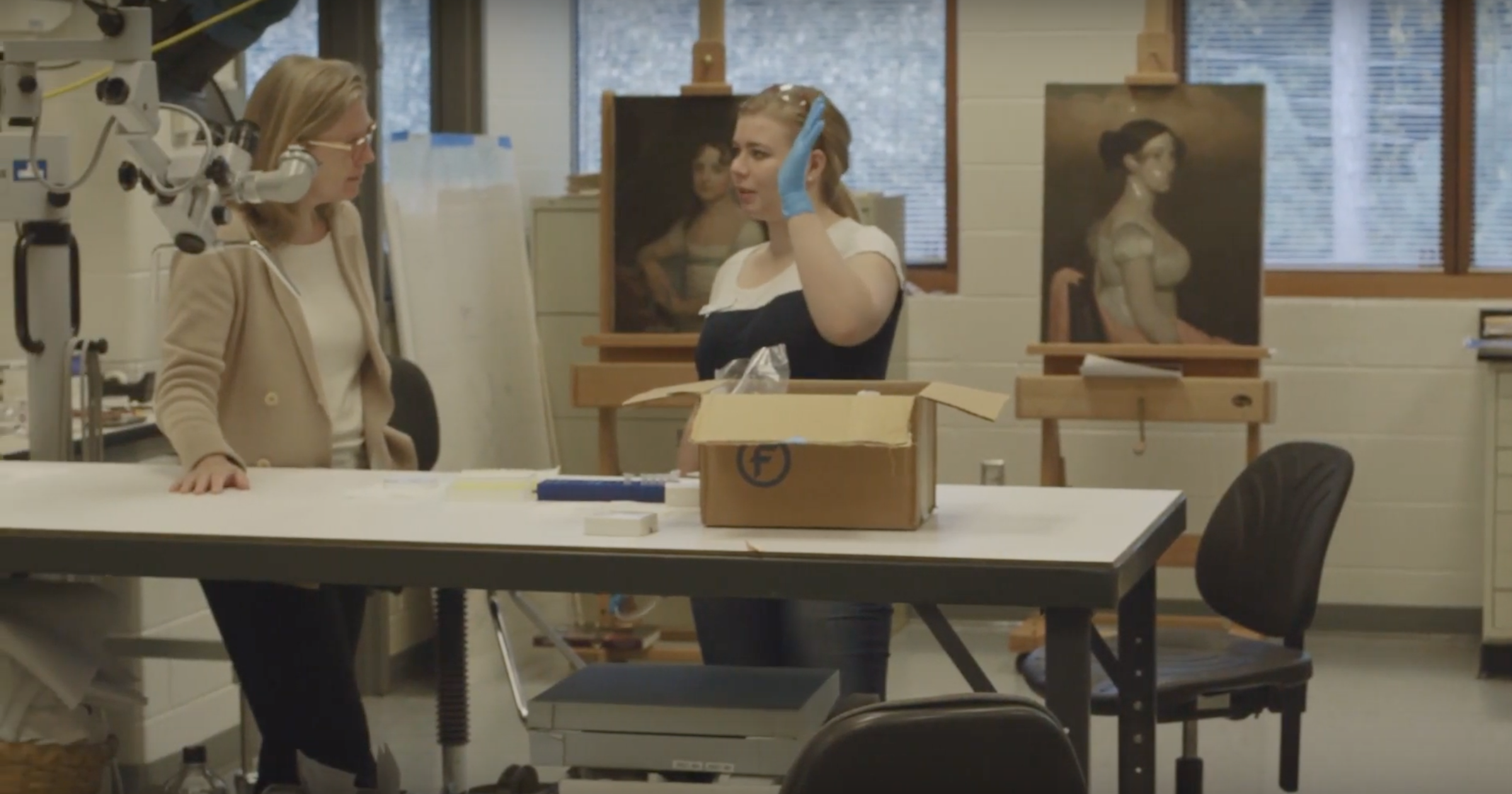 Time changes everything, and time can be especially hard on paintings executed with the natural pigments used by painters of yesteryear.