Ruth Jones Nichols ’96 saw a familiar face in line that day. It was an elder from her childhood church. Years before, the woman was known for filling the bellies and cupboards of fellow church members who needed food. A recent retiree, her money hadn’t stretched as far as she thought it would. On that Friday afternoon, she stood alongside others in line at the Foodbank of Southeastern Virginia and the Eastern Shore trying to make ends meet.

It was more than chance that the two women’s paths crossed. It was an answered prayer. Jones Nichols had asked for a sign from God that her new job as CEO of the food bank was where she was meant to be.

Jones Nichols, who has led the food bank since 2016, was previously the executive director of the YWCA South Hampton Roads. A sociology major while at William & Mary, she says the seeds were planted for her more than 20-year career in the nonprofit sector during her freshman year.

“I want to be a person who brings about systemic change in society — a person who challenges the social structures and the status quo,” says Jones Nichols, who describes herself as a social change advocate. “I want to do that in a way that levels the playing field for marginalized people who have not been represented at the table.”

Putting food on the table

Based in Norfolk, Virginia, the food bank is a 75,000-square-foot warehouse that serves as a distribution center for 18 million pounds of food per year. That equates to 15 million meals annually, Jones Nichols says. The offerings are vast and go beyond a few canned goods and loaves of bread. Families are provided with fresh fruit, lean protein, dairy, vegetables, pasta and other cooking staples intended to last a few weeks to one month.

Jones Nichols says the goal of the food bank is not simply to eliminate hunger, but to address food insecurity.

“The difference between hunger and food insecurity is that you’re hungry when you miss a meal,” Jones Nichols says. “You’re food insecure when you can’t put the meal on the table.”

The food bank’s three main food sources are the United States Department of Agriculture, retail donors and purchased food. Jones Nichols says they partner with outside agencies to get the food out into the community. Outside agencies are often churches who secure the food from them for free or at a reduced cost before distributing it through their networks.

The food bank also uses mobile food pantries to deliver food to people. The refrigerated trucks used for their Mobile Pantry Program travel to neighborhoods known as food deserts, where residents don’t have easy access to grocery stores. They also have a BackPack Program that provides food to families by filling children’s book bags with healthy food before sending them home from school for the weekend or holidays.

Prepared for the world

Jones Nichols was one of three children raised in Norfolk by a single mother. She was told twice she shouldn't attend William & Mary by her guidance counselor, but was encouraged to apply by a high school mentor and the late Dean Carroll F.S. Hardy HON ’12. Hardy served as associate dean of multicultural affairs and later as associate vice president for student affairs at the university from 1980 to 1995.

“There were students from my high school who were headed to William & Mary, but they weren’t students who looked like me, so I didn’t think William & Mary was an option,” Jones Nichols says.

It wasn’t until she experienced the university’s former STEP summer program for high school students and had the opportunity to meet Hardy that she knew she had to apply. Jones Nichols, who received a scholarship to attend W&M, initially wanted to be a pediatrician, but decided to major in sociology after a freshman science course proved more difficult than she expected and her science lab reinforced that she didn’t like the sight of blood. Sociology came naturally to her.

“Ruth was here at a time when the population of African-American students on campus was still pretty small,” says David Aday, professor emeritus of sociology. “I always felt she had a very keen analytical sense about the effects of race and class and the difference between those things. Ruth was particularly smart and thoughtful as a student.”

While at W&M, Jones Nichols was a founding member of the E.S.S.E.N.C.E. Women of Color student organization. She says Hardy prepared her for leadership roles during her time at W&M and beyond.

“Dean Hardy, for me as for many other students, was the other mother, she was the auntie, she was the mentor, she was the dean and she was Dr. Carroll F.S. Hardy,” Jones Nichols says. “She was so many things wrapped into one profound person. Dean Hardy always encouraged me to pay it forward. I’m supposed to use my education and the opportunities I’ve been afforded to be an advocate for others.” 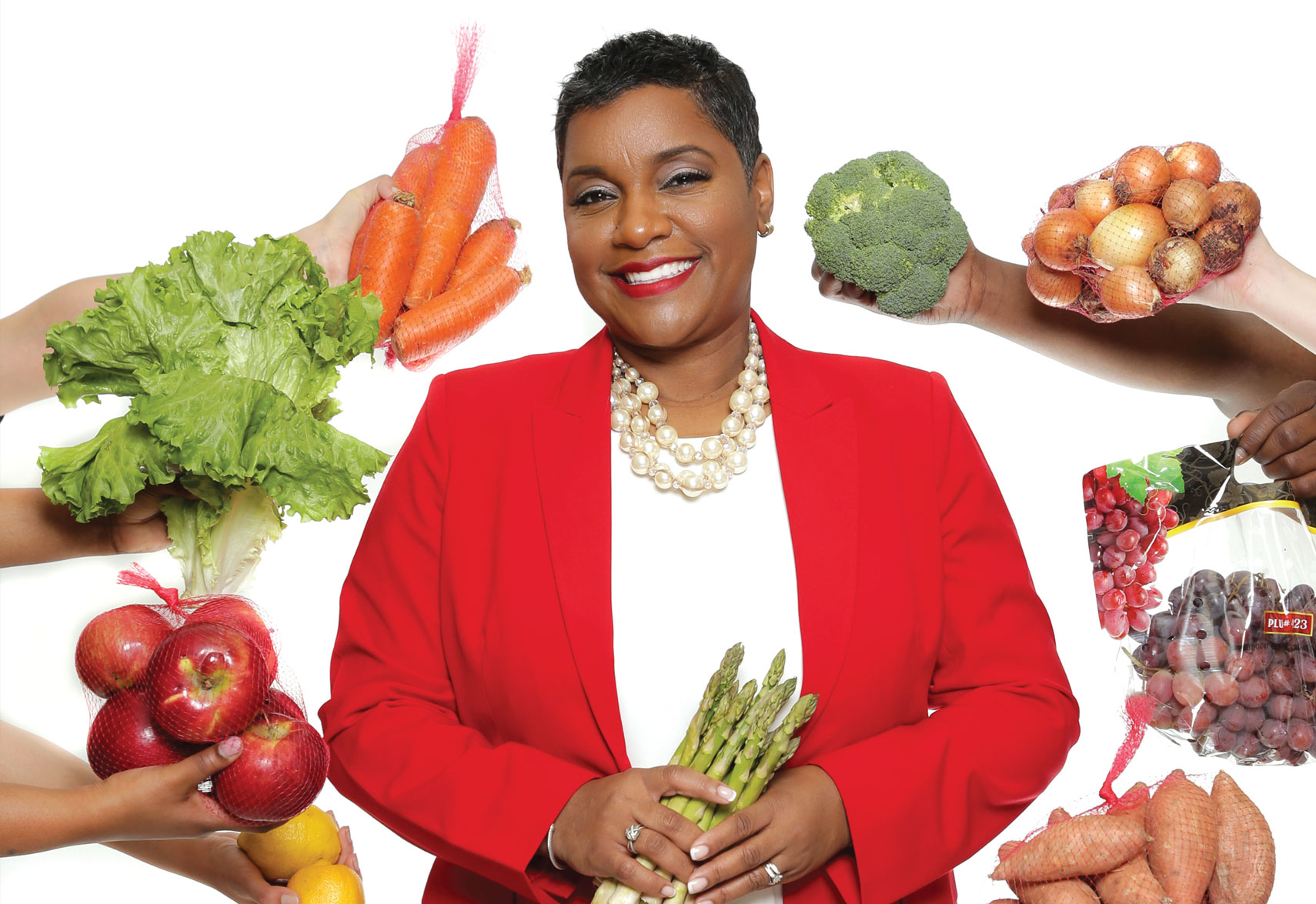 Getting to the Root

Jones Nichols has poise. She has a professional, yet personable, manner as she walks through the food bank explaining the logistics of their operations. There is focus and enthusiasm in her voice as she speaks about the work that the food bank does to help others, and she speaks highly of the team of 55 staffers and over 6,000 volunteers who make it possible. Jones Nichols passes at least 15 members of her team during a recent walkthrough of the food bank. She greets them all by name.

While the work of food banks has traditionally been to help supplement food in a community, Jones Nichols says it should be examined through a different lens in order to truly eliminate hunger.

“When you think about the evolving work of the food bank, we have to leverage food to stabilize the lives of some people we serve like children and senior citizens, but we also have to leverage food in a way that will help people transform their lives and move toward self-sufficiency,” she says.

Factors preventing some from achieving self-sufficiency vary. It could be the loss of a job, retirement or inability to attain employment due to a disability. For example, Jones Nichols partners with those in the community to help people debating whether they should spend money on food or pay for a job certification program. Her food bank is creating programs that will provide food for individuals in job certification programs in order to meet both needs.

Every day Jones Nichols draws on her strong sociology background, which began at W&M, to get to the root causes of why people stand in line at the food bank.

“As opposed to us saying, you have to show up in our line to get food, we are now looking at places in the community where we need to go and partner with other organizations to make sure we have a more holistic model for assisting people,” Jones Nichols says.

“Seems pretty complicated, right? You almost have to be a sociologist to see it."