William & Mary alumni writers aren’t afraid to tackle what’s important in their work — from race relations to politics to brain development. They are also providing a much-needed escape into the world of fiction. Take a look at the garden of books by W&M alumni blooming in the spring quarterly book round-up.

Rarely has selling shoes in a mall looked as exciting as it does in the satirical novel “Booted,” which follows middle-aged Victor Barstow as he turns to selling women’s shoes after losing his family and previous career. Will his plan to redeem himself by gaining control of a family-owned boot manufacturer and searching for a family heirloom work?

In the new book by the best-selling author of The Darkest Minds series, nine Greek gods take to the streets of Manhattan to participate in what’s become a regular trial for them — they become mortals and are hunted by the descendants of ancient families every seven years as punishment for a past sin. One god — Lore Perseous — has long refused to participate, but what will she do when two other candidates request her help in this year’s competition?

Even as We Breathe: A Novel

In this debut novel set during World War II, teenager Cowney Sequoyah believes he’s escaped from his hometown in the Smoky Mountains by finding a summer job at the posh Grove Park Inn and Resort in Asheville, North Carolina. Although he finds a friend in fellow employee Essie Stamper, a Cherokee woman, Cowney realizes he hasn’t escaped racism and prejudice when he is accused of abducting the daughter of one of the resort’s inhabitants — all Axis diplomats and their families held as prisoners of war.

In her latest book of poetry, the author shares her work inspired by her time in the Minnesota Legislature. Corbett uses a variety of poetry types — from sonnets to prose to the villanelle — to shed light on government work, co-workers, elections, history, retirement and much more.

Leading Chicano activist, artist and teacher José Montoya’s legacy comes to life through illustrations and words in this book about his movement to use the multilingual and multicultural expressions of the communities he studied and appreciated. The book uses research and oral histories to posit a new system for Latino artists to combine activism, poetry, education, music and art.

Alumni may recognize locations featured in Dr. Harris’s first book — a young adult novel set in Newport News. Afraid his sister’s disappearance will be barely investigated by police, a young man decides to take the investigation into his own hands and bring his sister home.

Emileia and 11 other Martians continue their adventure in high school society in Jewel, Indiana, in this eighth book of the Starstruck series, a combination of science fiction, teen romance and adventure. The locals are getting suspicious of the beautiful and athletic newcomers, though. Can Emileia protect her fellow Martians and save Jewel from a devastating new weapon?

The Mating Calls of the Dead

In his new book of poetry, Kistulentz intertwines place — buildings, mines, building lots, the South — with love, grief and death. The author’s ability to add meaning to small, personal details of everyday life make his poetry especially significant to readers.

Written and illustrated texts created by some of the Carlisle Indian Industrial School’s more than 10,000 students between 1879 and 1918 provide an opportunity for education and writing scholars to understand both the perspectives of the students and remedial literacy education provided by the school. Sarah Klotz analyzed texts from the school’s first three-year term in the context of educational philosophies and provides a history of remedial literacy education and offers a new way of interpreting Indigenous language and writing to deepen understanding of the Native American writing tradition.

Pregnant Girl: A Story of Teen Motherhood, College, and Creating a Better Future for Young Families

After being told as a pregnant high school student that college wasn’t an option for her, Nicole Lynn Lewis attended William & Mary with her young child in tow. She went on to found Generation Hope, which supports teen parents and their children to create a legacy of educational and career achievement. Lewis tells her story and describes how poverty, classism, and systemic racism impact teen pregnancy and how effective programs can provide open the doors of opportunity. Join Nicole for a virtual discussion on May 12 hosted by the W&M Alumni Association and the W&M Washington Center.

Why Those Who Shovel Are Silent: A History of Local Archaeological Knowledge and Labor

Author Allison Mickel spent six years completing ethnographic work and researching archival documents and photos in Jordan and Turkey to understand the impact and expertise of community members on archaeological sites in the Middle East. Their work over more than 200 years have contributed to archaeological and anthropologic understanding, while increasing their own excavation and interpretation knowledge. The book focuses on current and former site workers at archaeological digs in Petra, Jordan, and Çatalhöyük, Turkey, and offers an in depth look into the history and cultural issues of the sites and their workers.

The Day I Became a Lawyer!

In her new picture book, attorney Stephanie Morales inspires and encourages readers to reach their potential. The star of the book is smart, charming Stephanie, who does well in school, but can't decide what she wants to be when she grows up. Her mother steps in to help Stephanie see what her future can look like.

In the Arena: A Memoir of Love, War, and Politics

Marine, Bronze Star winner, husband to Lynda Bird Johnson, politician — Chuck Robb’s led much of his adult life in the limelight. Go behind the scenes of the noted statesman’s life from his days serving as a soldier to those serving in the U.S. Senate. Join Alice for a virtual discussion on June 23 hosted by the W&M Alumni Association and the W&M Washington Center.

Catherine Littlefield: A Life in Dance

This first biography of Catherine Littlefield, an influential figure in 20th-century American ballet, accents the impact of Philadelphia on American dance history and looks at the connection between ballet and ice skating.

A Fairy Tale Unmasked: The Teacher and the Nazi Slaves

by DZ Stone ’76 and Dieter Vaupel

In 1983, high school teacher Dieter Vaupel and his students discovered their German town’s well-hidden past during World War II. They found that thousands of slave laborers worked in one of the biggest European munitions factories in Europe. After the discovery was made, Vaupel and a group of townspeople invited the former factory workers to return to Hessisch Lichtenau. W&M alumna DZ Stone helped write this first part of the story. Part two tells the story of one of the workers, Blanka Pudler, who began laboring in the factory at 15.

A History of the Human Brain: From the Sea Sponge to CRISPR, How Our Brain Evolved

The intriguing story of the brain development from watery beginnings to the complex organ it is in the heads of humans is chronicled by alumnus Bret Stretka, who also looks at the brain’s role in what it means to be human and the future of brain issues, like epigenetics.

The Sheriff: A Novel

by Austin Wright ’09 and Robert Dwyer

Sheriff Donovan, who’s suffering from terminal cancer, tries to cap his legacy by cleaning up his town with the help of Christian Prohibitionists. When some Three Chop citizens push back on these efforts, a battle over their home erupts. 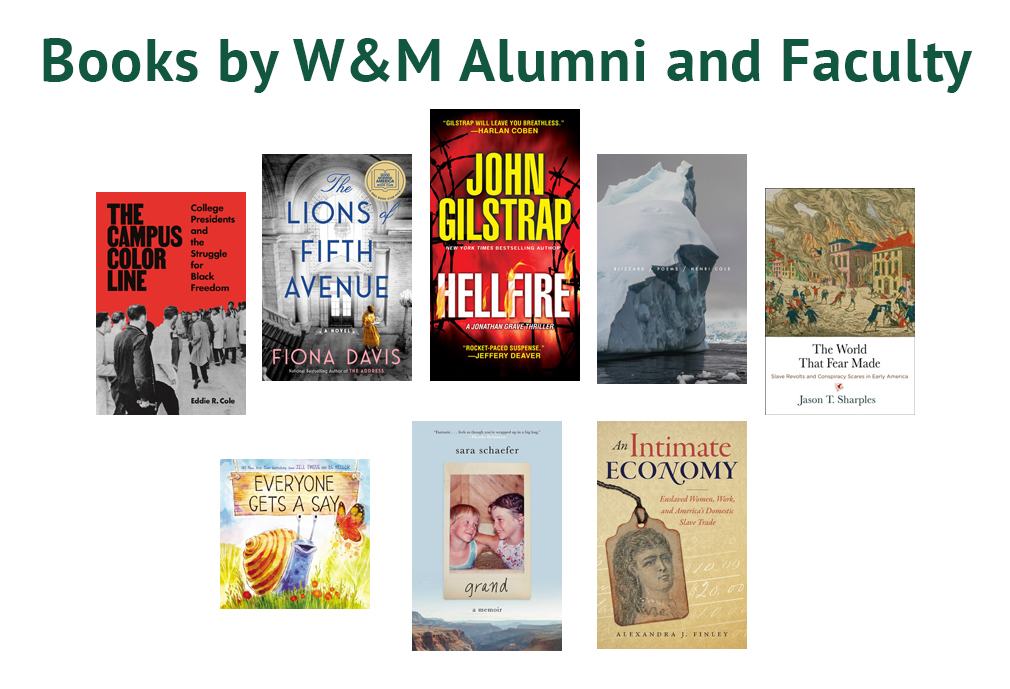 From a thoughtful study of the role of enslaved women in America’s historic economy to beautiful poetry to a fun children’s book about dodo birds, William & Mary alumni and faculty have published a bumper crop of great reads this fall. Readers will find plenty to feed their minds and hearts in this fall’s quarterly book roundup of titles by William & Mary alumni and faculty.