It was a long time coming. But on a picturesque Monday afternoon, with an atmosphere best described as festive, William & Mary broke ground on an Athletics Complex designed to improve the student-athlete experience while enhancing the university as a whole.

The two-phased project includes constructing a sports performance center and upgrading Kaplan Arena, which first opened its doors in 1971. W&M also will begin renovations of its tennis facility across Brooks Street.

"We've been waiting for this day for a long time — longer than I've been here," said W&M Director of Athletics Brian D. Mann, who was hired last summer. "Today, we are taking our first physical step in the William & Mary Athletics Complex … on what will be the magnificent centerpiece of Tribe Athletics.

"Every member of the William & Mary community will benefit. And, best of all, we are demonstrating to our student athletes that we are matching the commitment they make to us when they choose William & Mary by providing a new cornerstone for Tribe athletics."

W&M President Katherine A. Rowe stressed that while the complex will provide an obvious boost for athletics, it will benefit the entire university.

"The renovations we are creating as part of this complex will make this a fitting home for William & Mary Athletics and the whole university for the next 50 years. That's what we're beginning as we put our shovels in the ground today."

Seated in the front row for Monday's ceremony outside Kaplan were four of the project's top donors — Katie Garrett Boehly ’95 and Todd Boehly ’96, along with Jennifer Tepper Mackesy ’91 and D. Scott Mackesy ’91. Todd Boehly and Scott Mackesy believe improved facilities should result in more athletics success.

"Having played athletics here, [with] better resources, we would have been better," said Todd Boehly, who wrestled at W&M. "Scott and I just want to provide those resources or at least start on the path of providing them and position this to succeed.

"We care a lot about winning, and it's an attitude. When you start to accept that not winning is OK, everything else kind of falls apart."

Both Mackesys were former student-athletes, as Scott was a standout on the men's tennis team and Jennifer was part of several nationally competitive Tribe soccer teams. Scott seconded Todd Boehly's sentiments.

"Winning is about assets, which hopefully this addresses," he said. "We hope this really kick-starts a future generation and a real commitment to winning at this institution because we deserve it."

"Think about it: Who wouldn't want to go to a university that invests in its student athletes' success, both in competition and in the classroom?" she said. "As we gather here today, let us remember that May 9 marks the date that William & Mary takes its first step into becoming an institution that not only has prestigious academics, but exceptional athletics. A true Division I program."

Phase one of the project will include construction of what will be named the Mackesy Sports Performance Center. It will include strength and conditioning areas, study spaces, a sports medicine area and a full-sized practice court. Also in the initial stage will be refurbishing locker rooms in Kaplan Arena, along with a new videoboard and lighting for the playing area.

Phase two will improve the arena's seating and fan amenities. It will also expand and renovate the lobby and building facade.

Renovations to the outdoor tennis facility, which are to include the infrastructure and fan experience, should be finished by next spring when W&M hosts the CAA men's and women's championships. The facility will be renamed the Mackesy Tennis Center at the Millie West Courts.

Monday's ceremony followed a prosperous stretch in the All In campaign. On April 1, the university announced a group donation of $1.1 million toward the Athletics Complex. Less than two weeks later, Tribe Athletics set a one-day record by raising nearly $572,000 on One Tribe One Day, the university's annual day of giving (April 12).

On May 2, the momentum continued as the university announced a $2 million gift from the Gordinier family.

All In Chair Sue Gerdelman ’76 said the campaign has raised more than $32 million toward the stated goal of $55 million by June of 2024.

"This is just one example that underscores how the momentum keeps building, how we are moving forward boldly and with steely determination," she said. "However, our work is not done.

"We need the entire William & Mary community to help us complete the William & Mary Athletics Complex project. I know we will do just that because our Tribe, everyone here today, is and always will be All In." 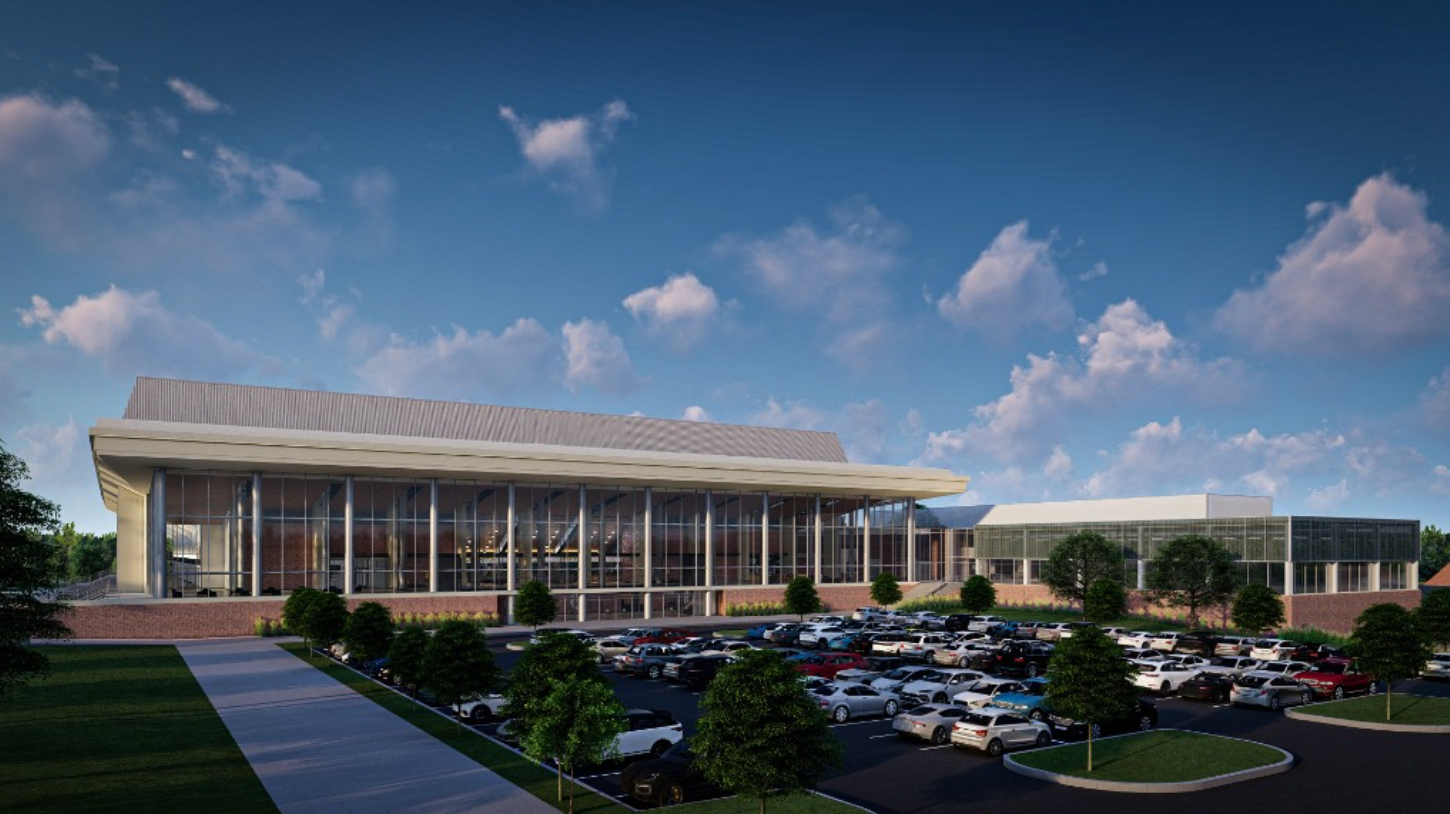 All In campaign marks first year with $1.1M for W&M Athletics Complex

As William & Mary's All In campaign marks its one-year anniversary, new gifts totaling $1.1 million to the W&M Athletics Complex mark an important step forward in reaching the $55-million fundraising goal. 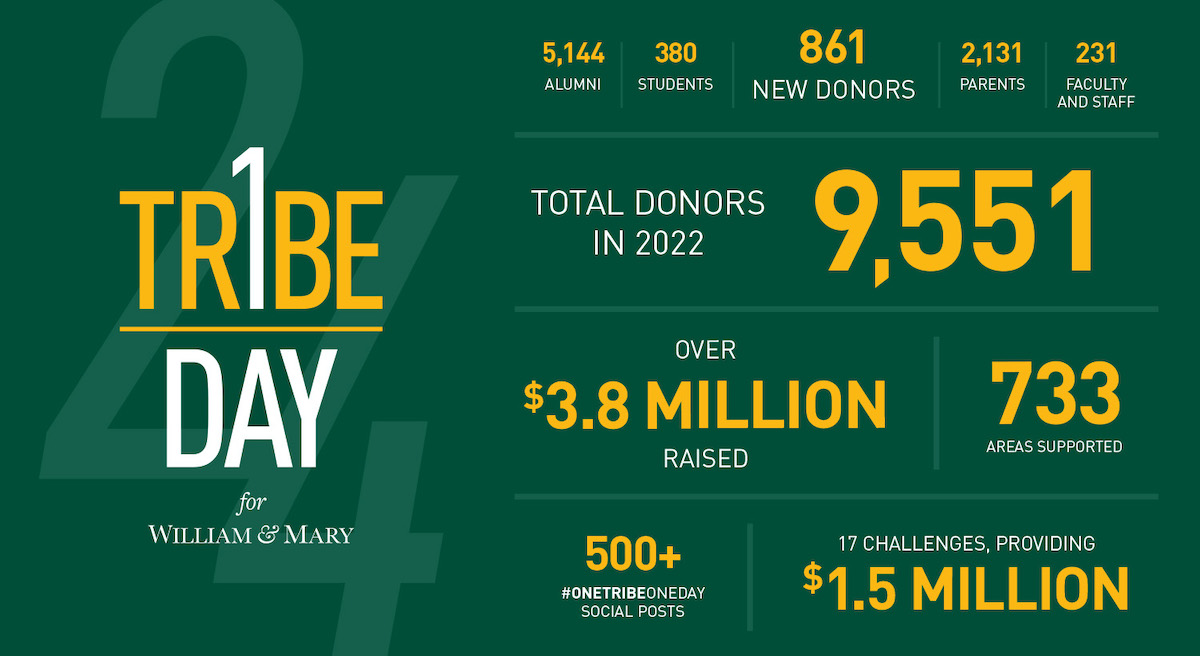 More than 9,550 students, alumni, parents, faculty, staff and friends collectively gave over $3.8 million to more than 730 areas across the university during William & Mary's ninth annual day of giving.

As William & Mary prepares for the May 9 groundbreaking and celebration of the reimagined home for W&M Athletics, the Gordiniers hope their generosity will help inspire others to give back in support of the new Complex.